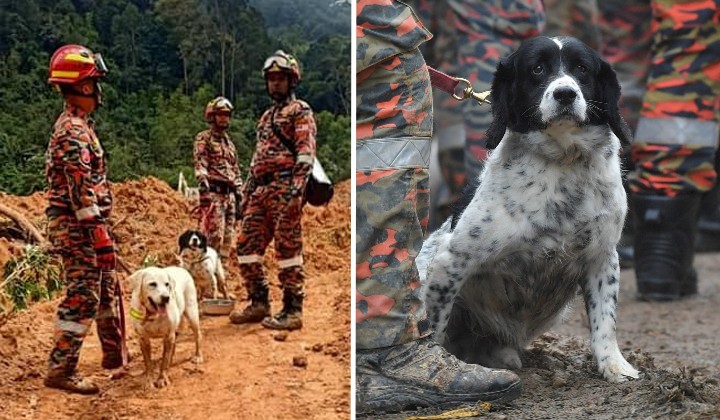 Four tracker dogs from the Fire and Rescue Department’s K9 unit involved in the search-and-rescue operations following the Batang Kali landslide last month have been awarded the Golden Performance medal, according to Bernama,

Here’s a video of Lady wagging her tail with pride and Blake being too nonchalant to even stand up during the award ceremony. These skilled and professional dogs are so adorable.

Nga also presented certificates of appreciation to the Director of the Fire and Rescue Operations Division Datuk Nor Hisham Mohamad who represented the firefighters and K9 unit involved in the Batang Kali operations and Selangor JBPM Deputy Director Wan Md Razali Wan Ismail, representing his team.

A total of 92 victims were caught in the 16 December landslide at the Father’s Organic Farm campsite, of which only 61 survived and 31 were killed.

Fire and Rescue Department Director-General Datuk Seri Mohammad Hamdan Wahid said the 36 dogs in their K9 unit are ‘living assets’ to ensure that firefighting and rescue operations can be carried out as efficiently as possible.

He also stated that the dogs would undergo daily training in disaster management based on simulated scenarios.

“They can also detect victims of drowning at a depth between 0.9 metres and 1.82 metres underwater,” he added.