The story of a cat exchanging a leaf with a fish everyday makes for a feel-good social post. 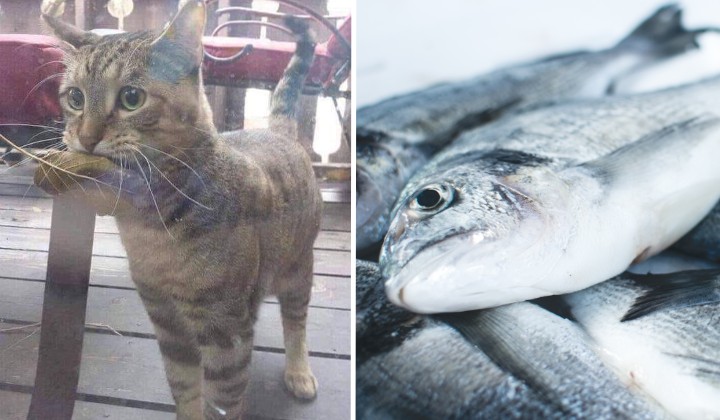 A few days ago, a cat on Twitter became an international internet sensation when a picture of him holding a dried leaf in exchange for a fish went viral with 2M views.

The account, @UnionRebelMs posted a picture of a brown tabby cat staring into a glass door with its puppy dog eye while biting a dried leaf in his mouth.

The story was that the cat brought the leaf to a shop one day after seeing a lot of people handing money to the owner to pay for a fish. Then the cat also imitated the customers by bringing a leaf, in hopes of exchanging it with a fish.

The shop owner thought it was cute on the first day so he gave her a small fish. Now, legend has it, the cat has been coming to the shop every day to buy fish with a leaf. Smart cat with a feel-good story.

Paired with an adorable and innocent picture of him holding the leaf, the story of the intelligent cat is actually so cute that everyone finds it convincing.

Seeing people come to buy fish and handing the owner, money, this cat went out and got a leaf to pay for her fish. On the first day, the owner of the shop thought this was very cute, so he gave her a small fish. Now everyday this cat comes in to buy a fish with a leaf. pic.twitter.com/AhKKDY2oL9

Since then, people have been sharing pics and stories of their own pets bringing ‘presents’ to them to show their undying love to their owners.

This cat and dog also bring their owners leaves, in exchange for a treat.

This dog brings his owner a stick instead of a leaf for a bone treat.

There are also similar amusing stories of cats and dogs using their brilliant minds to understand human logic.

However, as convincing as it sounds, allegedly, people have been saying the original story to be a lie.

The cat is actually someone’s (@tvfridges) cat called Mr Bill and she told everyone that the picture of her cat became viral on Reddit years ago. Now, it has resurfaced with the same story that got us hooked on it.

The owner is claiming that the account is using her cat’s picture as clout for more views on the post. She even provided pictures of her cat on the same patio, and him looking into the glass door from outside.

The reason behind the leaf in his mouth was that he has pica, a condition where a person/animal compulsively swallows non-food items such as plastic or crunchy things. He was chewing on it and wanted to go back inside when the wind scared him.

Ok this is going to make me lose my mind. I keep seeing this everywhere. This is my cat. He does not bring leaves. That is an apartment patio in the background. Somehow our cats photo (which went viral on Reddit years ago) is clickbait EVERYWHERE with this fake story.

Since then, the account has replied to her claim saying that they’re not using it as clickbait and they’re not harming anyone with the feel-good story.

Fake or not, at least we can agree on one thing. This cat is super cute!

What are some of the things that your pets gift you? A lizard? A rat? A piece of your old missing sock?

Malaysian Cat Whisperer? Watch How This Groomer Turns A Feisty Cat Into A Tame Feline