A young wild boar nudged a cylindrical obstruction to the road side and away from the cars. 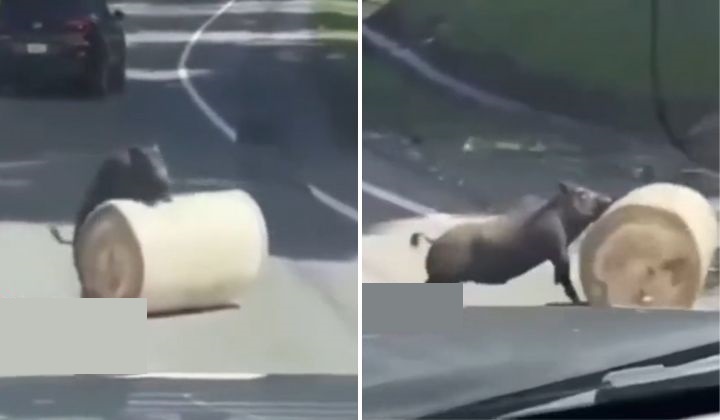 Although wild boars look adorable, people largely stay away from them because they can be dangerous when they feel threatened.

However, a brave wild boar has earned praise online for being super helpful on the road.

In a viral video believed to be taken on a Malaysian highway, a young wild boar could be seemingly seen rolling away a cylindrical obstruction on the road away from the cars.

While the wild boar could just be playing around, its actions inadvertently helped clear the road for road users.

Netizens thanked the wild boar for helping and ensuring the roads were safe to use. The wild boar was also praised for its intelligence.

How intelligent are wild boars?

The wild boar’s ‘intelligent’ actions shouldn’t come as a surprise because it has been shown that these animals are able to ‘think’ and ‘care’ about others.

A paper published in Nature has shown that wild boars display a high level of intelligence and empathy.

In the observation, a wild boar freed two piglets trapped in a cage. Researchers of the paper stated that such rescue behaviour is an “extreme” form of prosociality only exhibited by a few other animal species.

The rescue behaviour shown is also considered a complex form of empathy.