Ivan Beerkus and Angela Nikolau are known for their death-defying stunts on skyscrapers across the globe. 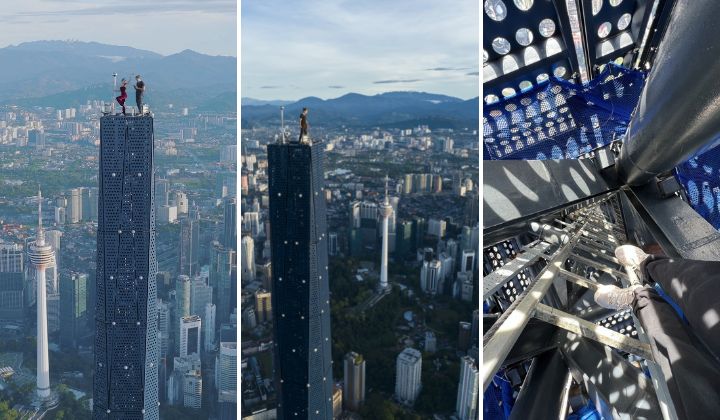 A daredevil Russian couple, Ivan Beerkus and Angela Nikolau, uploaded pictures of themselves posing on top of the Merdeka 118 building online and it led netizens to question the security of the building.

The couple is known for their thrill-seeking and death-defying feats across the globe and has scaled tall buildings everywhere they went just to take a good shot for their followers.

The pictures of the couple on Merdeka 118 were first posted by Ivan Beerkus on Monday on SkyscraperCity.com, and it spread to other sites such as the Malaysia community subreddit.

It’s believed the couple used a drone to capture the images. Based on Beerkus’s reply on the website, the couple climbed the stairs inside the building to get to the spire.

Over on Instagram, Beerkus wrote that he heard many stories about people trying to illegally climb Merdeka 118 and felt sad for those who allegedly ended up in prison for several months.

He also mentioned that there were plenty of closed doors and CCTV inside the building, which made it the most desirable building in the world (to climb, probably).

According to New Straits Times, it has not been verified whether anyone was jailed for attempting to climb Merdeka 118 as claimed by Beerkus.

However, a Frenchman and urban climber Alain Robert was arrested for climbing the Petronas Twin Towers in 2009.

The “French Spiderman” was fined RM2,000 for his actions.