The beloved Canadian band will be performing at Zepp Kuala Lumpur on 8 March 2023 as part of their Harder Than It Looks Tour in Southeast Asia. 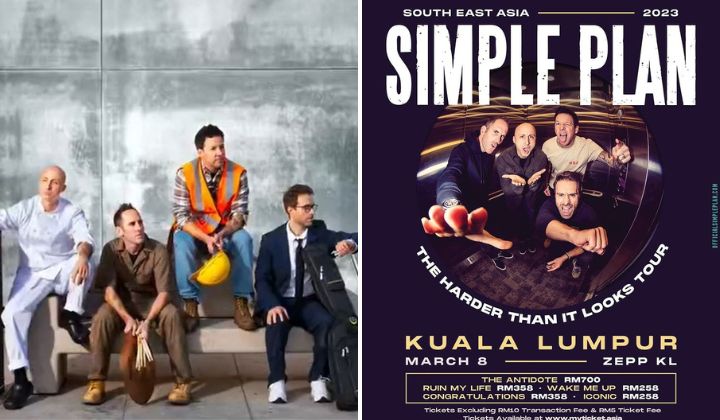 Do you miss listening to the Canadian pop punk band Simple Plan?

Well, mark your calendars and prepare some cash because Simple Plan is performing in Malaysia as part of their Harder Than It Looks Tour in Southeast Asia and ticket sales start tomorrow (28 December)!

Simple Plan is scheduled to perform at Zepp Kuala Lumpur on 8 March 2023 after performing in Singapore on 7 March as the first location in Southeast Asia before flying to the Philippines on 12 March.

Tickets are priced from RM258 to RM700 (excluding fees) and will go on sale tomorrow at noon at www.myticket.asia

There are five seat classes:

The last time Simple Plan performed in Malaysia was at KL Live in 2016.

The band, comprising Pierre Bouvier, Chuck Comeau, Jeff Stinco, and Sebastien Lefebvre, was formed in Montreal and made global headlines with its 2004 hit song Welcome To My Life. Their other popular songs include I’m Just A Kid, Perfect, and Jet Lag.

Simple Plan’s latest album Harder Than It Looks was released last May, with hits such as The Antidote and Wake Me Up (When This Nightmare’s Over).