Da Nang is a modern Asian metropolis that boasts lots of good food, apart from its cultural and outdoor attractions. 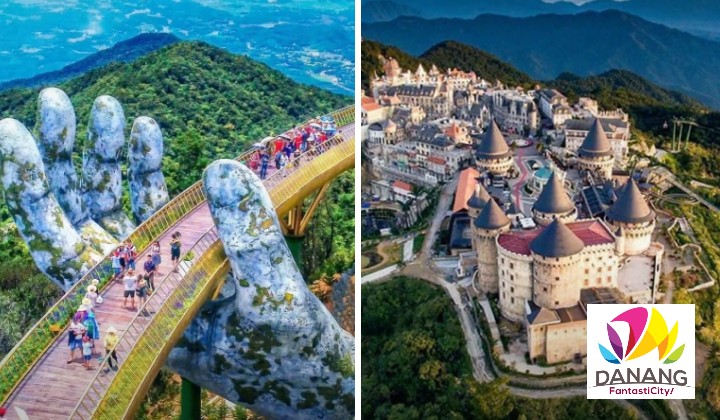 Vietnam is a Southeast Asian country known for its beaches, rivers, Buddhist pagodas and bustling cities.

People usually think of Ho Chi Minh and Hanoi when they think of Vietnam.

But in recent years, Da Nang, the fourth largest city in Vietnam, is fast becoming Vietnam’s top draw as a fantastic city that exceeds expectations.

Da Nang is the commercial and educational centre of Central Vietnam and is the largest city in the region.

Da Nang is also the tourism hub of South-Central Vietnam, with a west coast location that makes for beautiful sunsets against an impressive backdrop of lush mountains.

The port city on the South China Sea is blessed with pristine white, sandy beaches, set against a modern Asian metropolis backdrop with its many high rises.

Da Nang is also steeped in history, including Hoi An Ancient Town, the Complex of Hue Monuments and My Son Sanctuary.

Central Vietnam is blessed with an abundance of sightseeing opportunities: the Da Nang / Hoi An centre has been taking pole position with its ample amount of landmarks and natural beauty. This full-day takes up everything – from Champa history to UNESCO. https://t.co/xWfoNUHLVy pic.twitter.com/NUIUfekFMI

These are sites approved by the United Nations Educational, Scientific and Cultural Organization (UNESCO).

Here are some recommended tourist attractions in Da Nang that travellers should visit!

Opened in 2018, the Golden Bridge is a 150-metre-long pedestrian bridge in Ba Na Hills.

Its unique design resembles a bridge lifted by two giant hands, and the golden yellow hue of this pedestrian bridge makes it both photo perfect and an excellent place for sightseeing.

From the bridge, travellers can see landscape views of the Trường Sơn Mountains, hills on the outskirts of Da Nang, and beautiful expanses of forest.

The Golden Bridge only requires a cable car ticket and is open every day of the year.

The most crowded hours range between 9 am and 5 pm when many people go there to catch the sunrise and sunset moments.

Whether it’s sunny or foggy, the natural views from this location are always eye-catching and dramatic.

The Dragon Bridge spans the Han River and is touted as one of the most beautiful bridges in the world.

Shaped like a golden dragon, it is one of the main routes to tourist attractions around Da Nang.

The local community believes the figure of a dragon on this bridge symbolises strength and good luck.

Every Saturday and Sunday at 9 pm, the road closes down, and the Dragon breathes fire twice, then spews water twice.

Dragon Bridge is decorated with thousands of colourful LED lights that light up every night.

Travellers can also take a boat ride, cruise on the Han River, and enjoy the breathtaking scenery, including the atmosphere of Da Nang’s bustling night views.

My Khe Beach in Da Nang is touted as the most picturesque beach in Vietnam.

It is about 10 km long and runs from the foot of the Son Tra peninsula to Ngu Hanh Son.

American’s leading economic magazine, Forbes, voted My Khe beach in Da Nang as one of the six most attractive beaches on the planet.

The name of this beach comes from the colonial era when many American troops called it My Khe Beach.

Many hotels and other accommodations are within a stone’s throw of My Khe Beach, including an endless choice of luxury resorts such as the stunning five-star Danang Golden Bay Hotel.

Danang Golden Bay Hotel is situated at the Han River, East Sea and Son Tra Peninsula meeting point and is well-known for its gold-plated rooms and apartments.

Danang Golden Bay Hotel offers more than top-notch services; it mesmerises guests with gold as they step into its lobby.

Everything is gold-plated, from the decors of the entrance to the cutlery and tea sets used, the hotel’s swimming pool and even its toilets and bathtubs.

It’s no wonder that the symbol of gold inspires their signature design.

Marble Mountains, south of Da Nang, is one of the best things to do in Da Nang, especially for those who like hiking and mountain climbing.

A complex of five hills made of limestone and marble, the hilly area has a beautiful and charming natural panorama.

Marble Mountains is famous as a religious pilgrimage site with many passages, caves, temples and peaks that offer excellent views.

There are 156 steps (about the equivalent of a 12-storey building) leading to the top of Thuy (the peak of the mountain cluster named after the water element).

A leisurely and careful pace is recommended due to unevenness and slipperiness, especially after rain.

The best time to visit here is around 4 pm because the sun is starting to fade, and the air is cooling.

Ba Na Hills is a hill station at an elevation of 1,485 metres and located in the Trường Sơn Mountains west of Da Nang.

The French discovered the place in the late 19th century and built many large villas, sports grounds and restaurants.

The name “Ba Na” was because the area was full of bananas.

Most people only go to Ba Na Hills for a day trip, but if you want to immerse yourself in the atmosphere, you can spend the night at the 4-star Mercure Ba Na Hills French Village.

Many exciting places in Ba Na Hills are ‘Insta-worthy’, so you may record your vacation with your family or friends.

Han Market is the central market, located in the heart of Da Nang, near the Han River Bridge.

Thanks to its strategic location, Han Market is a haven for shopping activities and attracts tourists, locals and abroad.

There are many goods at Han Market, from fresh foods (vegetables, fruits, fish and meats) and dried foods to clothes and shoes traded all day long.

The place is also perfect for those looking for Da Nang’s souvenirs.

Besides the variety of choices, Han Market attracts many people by its relatively low prices because it is a wholesale market.

Linh Ung Bai But Pagoda draws many tourists and Buddhists from all over the world.

They admire its beauty and learn more about Buddhist culture as the pagoda is considered a Buddhist paradise on earth.

Touted as the largest pagoda in Da Nang in both scale and art of architecture, Linh Ung Bai But Pagoda is a place of worship, living and studying for Buddhist monks and nuns.

Nearby is a Lady Buddha statue, said to be the tallest in Vietnam at 67m, equivalent to a 30-storey building.

Banh Nam and Banh Bot Loc are two kinds of rice dumpling cakes which are incredibly famous in Da Nang.

Their outer layers are made of rice flour to cover the fillings, including shrimp and pork.

After fully shaping, the raw cakes will be placed on banana leaves and put into food steamers to be cooked.

Vietnamese spring rolls are traditionally served with nước chấm (a dip made of fish sauce), but they’re also great with peanut sauce.

Overall, travellers will be spoilt for choices as there are many famous restaurants in Da Nang.

Among them is Am Thuc Xeo, which offers the distinctive harmonious flavour of Xeo cuisine.

The offerings include a vast array of Vietnamese specialities, such as pho (a popular soup dish consisting of broth, rice noodles, herbs, and meat) and a vegetable hot pot.

The Vietnamese massage is a stimulating deep-tissue massage focusing on muscles and tendons.

The masseuse can release tension, rejuvenate, and relax by applying an ancient style of targeting pressure points, muscles and tendons.

In Da Nang, many high-quality spas and massage centres can be found scattered across the city.

Tipping isn’t mandatory or customary, but it is always appreciated.

Fly To Da Nang With AirAsia

Now you don’t have to wait anymore.

The direct flight from Kuala Lumpur to Da Nang takes about 2 hours and 40 minutes, with a distance of 1,638 km.

There are 22 flights per week from Kuala Lumpur to Da Nang (as of December 2022).