There appears to be a few maggots lurking in the soy sauce bottle at a Sushi King outlet. 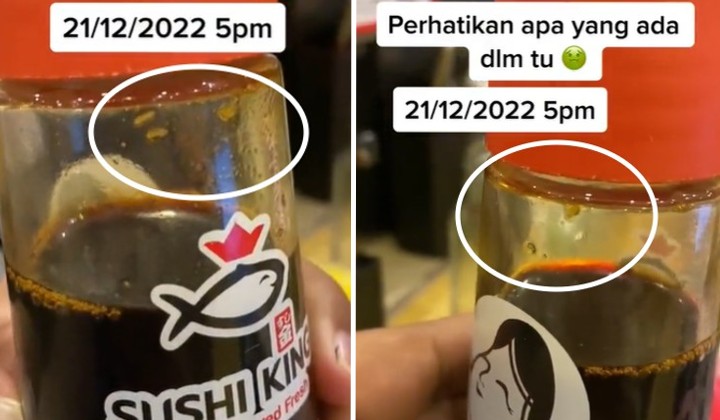 Sushi King finds itself on the receiving end of criticism when a customer recorded and shared an unhygienic incident at one of its outlets recently.

Yesterday, a TikTok user (@dyrasalleh) shared a video on her account which has now gone viral with 1.1 M views and 23 K likes at the time of writing.

In the video, she went to the local sushi chain and found something peculiar lurking in the soy sauce bottle.

At first, it seemed like nothing was wrong, but when we take a closer look above the logo on the shoyu bottle, there appears to be a few maggots sticking to the walls.

Not long after the post went viral, Sushi King Malaysia responded to the issue quickly by issuing a statement in both English and Malay on their social media.

In the statement, Sushi King apologised to the affected customer and takes full responsibility for the issue.

They will conduct an investigation regarding the matter and will further reinforce the Standard Operating Procedures (SOPs) for food handling and employee training management.

Besides that, they have also reported this incident to the Ministry of Health themselves and will cooperate with the authorities to take necessary actions.

Food Hygine is a priority to our company policy and we will not compromise on this matter.

Nevertherless, we take full responsibility and apologise if this incident has caused concern among all ourloyal customers.

Mixed reaction from the public

Many applauded the F&B chain for handling the complaint promptly and for being responsible.

However, some people also feel that Sushi King is getting a little bit behind on hygiene in some of their outlets and are always left with a lack of employees in some outlets.