The man apparently wore the women’s prayer garment to hide his identity and stole an iPhone X in a mosque in Seksyen 18, Shah Alam during morning prayers. 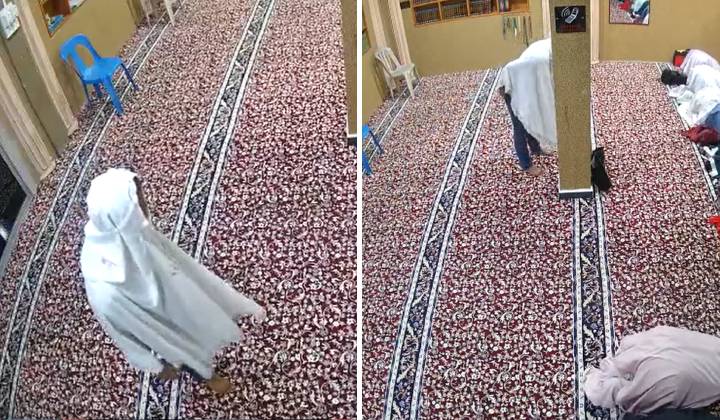 Believe it or not, cases of men wearing a telekung (Muslim woman’s prayer garment) in order to steal in mosques are not actually rare in Malaysia. There have been cases reported over the years.

In 2019, a man wore a telekung to disguise himself and stole money from a mosque’s donation box in Klang. In 2020, a 19-year-old man pleaded guilty after being caught stealing two purses from the women’s section of the mosque while wearing a telekung.

Clearly, this act of stealing has become increasingly popular.

Recently, a similar case happened in a mosque in Seksyen 18, Shah Alam. A CCTV camera footage showed the man in a mosque during morning prayers, where he stole a phone in the women’s section.

The video was shared by Twitter user Azfar (@azfrrr) last Tuesday (20 December). He asked the public for help to locate the man. He said that the man stole an iPhone X that belongs to his mother and he would reward anyone with information on the man.

In the video, the man was seen wearing blue jeans with a black shirt. After grabbing a telekung and donning it, he then loitered a bit behind the congregation and waited for them to prostrate before stealing a phone from a woman in a black telekung.

It’s not his first, and probably not his last time

According to another social media user, the same man had allegedly committed the same act in another mosque in Seksyen 18, Shah Alam later that night (20 December). She also had a CCTV camera footage of the man stealing a bag from the women’s section, this time, ditching his telekung disguise.

Thanks to the joint efforts of Shah Alam residents, particularly in Seksyen 18, the man was finally arrested last night (22 December) in Shah Alam.

Azfar updated the status of the incident earlier today and said that he would leave the matter in the police’s hands as he already made a report regarding the issue earlier.

He thanked everyone for their help and support.

For future safety, women or men praying in mosques should take extra precaution in placing their belongings. Place them in a spot where it’s not easily accessed or seen by strangers.