James Cameron takes the audience back to Pandora and shows the struggles the natives still face from humans. 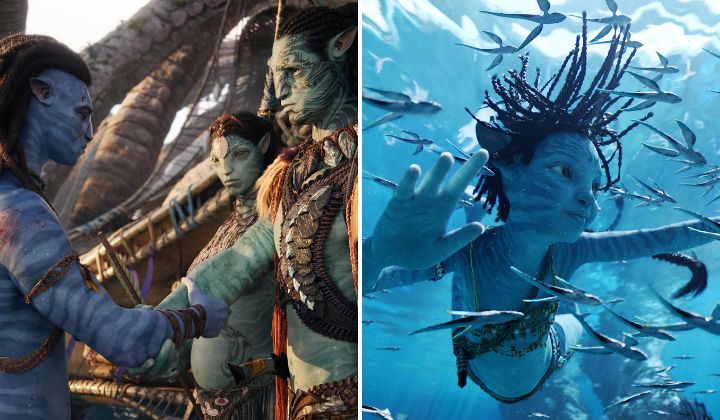 Set more than a decade after the events of the first film, the audience rejoins the Sully family and their fight for survival in Avatar: The Way of Water.

Jake and Neytiri now have a family of their own and live peacefully in Pandora, but it isn’t long before their past comes back to haunt them in a huge way.

In this Avatar sequel, the Sully family must stay united to live through another day and protect their home.

Avatar: The Way of Water will be shown in cinemas near you on 15 December 2022.

Avatar: The Way of Water is a visual spectacle similar to the first movie. At its core, it’s a simple story of surviving as a family and adapting to changes.

At first, I was worried that watching the film in 3D might make me nauseous but the beauty of the world of Pandora is captivating enough to make you concentrate on the film without issues (or maybe the 3D tech has come a long way).

The underwater world is beautiful and it was wonderful to see the new places in Pandora coming to life in 3D.

There were moments of reflection for me while watching the sequel. For comparison’s sake, what’s happening to Pandora, the Sully family and by extension, the Pandoran natives, are similar to what happens in wars in our real world.

The attack from humans and the destruction they leave behind made the Sully family refugees in their own homes.

It makes one wonder whether that is how we’ll behave when we travel to another planet with sentient life since we’re back with space travel (side-eying the likes of Elon Musk and Jeff Bezos).

If you’re looking to immerse yourself in a story or love seeing a fantasy world come to life, Avatar: The Way of Water is an enjoyable watch whether it’s in 3D or not.

But if I have to choose, I’ll recommend watching it in 3D if you can. Treat yourself!

There’s nothing groundbreaking story-wise but it doesn’t make the film unwatchable.

As mentioned above, it does make one reflect on our human behaviours and the need to lord over other nations. There are some parts that made me go teary eyed so if you’re the same as me, do bring some tissues.

To watch the sequel, you don’t need to remember everything in the first film. The sequel includes a bit of backstory here and there enough for the audience to piece things together.