The uncle said we all gamble by making life decisions that may never pan out. 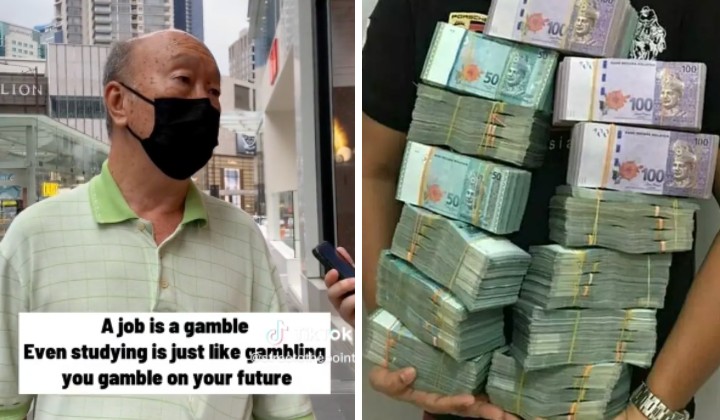 What should you do if you have RM1 million?

You could do many things with a million ringgit, but for a senior citizen, the smartest is to gamble with it.

The elderly man said this when he was randomly interviewed on the street in Kuala Lumpur.

Speaking in Mandarin, he reasoned that everything in life is a gamble and that starting a business is no exception.

Elderly uncle on everything in life is a gamble.

At the same time, he advised against making money illegally.

He warned against being greedy, saying that unchecked greed can destroy a person.

Citing an example, he said if people found money on the street, they should try to return it to the rightful owner.

He said those who keep the money, which is not theirs, would feel unease.

The uncle’s wisdom has since gone viral, with more than 185,000 views in less than 24 hours on Streetothepoint‘s TikTok account.

Many netizens agreed with the uncle, while some feel the younger generation would think differently.

Is RM1 Million Enough To Retire In Malaysia?

Malaysians must have at least RM900,000 to RM1 million if they plan to retire in 20 or 30 years, according to the Employees Provident Fund’s (EPF) chief strategy officer Nurhisham Hussein.

The Star quoted Nurhisham as saying that the amount would be the ‘bare minimum’ after accounting for essentials like medical expenses and inflation.

He calculated that individuals would need around RM600,000 for proper retirement in Kuala Lumpur.

Some netizens said Nurhisham’s advice was out of touch with reality and not helpful because few Malaysians could afford to have that much.

READ MORE: EPF Says Malaysians Need To Be Millionaires To Comfortably Retire, How Much Do We Need To Start Saving?

That dude in EPF who said that Malaysians need RM1 million to retire should’ve kept his mouth shut.

He simply can’t know it and the “solution” is an impossibility for almost all of us.