A bee hive that was growing on a lamp post in Bukit Bintang drew some attention when firefighters tried to remove it. 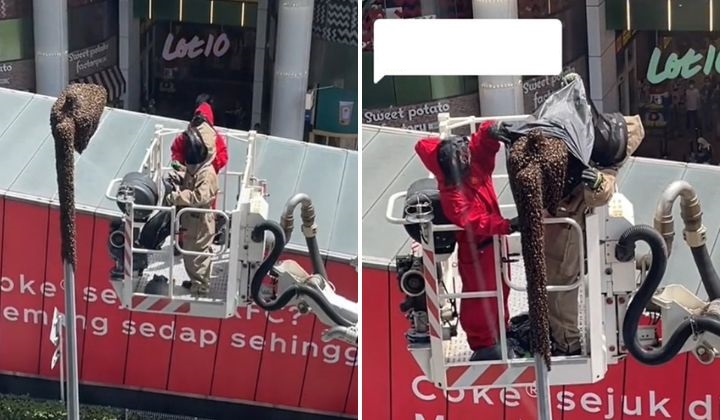 People walking about in Bukit Bintang might have recently witnessed a rare scene involving bees.

Based on several video clips captured by a Tiktok user @awasomeliddat, two firefighters were tasked to remove a bee colony that gathered on a lamp post right across Lot 10.

According to @awasomeliddat, the bees were sprayed with smoke to calm them first.

The hive was buzzing and growing on the top of the lamp post while the two brave firefighters in fully covered protective suits inched closer on a forklift.

Netizens wondered how the bees would be removed and were surprised when the firefighters ingeniously whipped out a black rubbish bag.

The firefighters slowly lowered and covered the top of the lamp post with the black rubbish bag.

In another video, one of the firefighters also used the same technique to remove a smaller colony that formed below the lamp post.

Once most of the bees were gathered inside the plastic bags, the bags are tied up before being transported elsewhere.

Netizens were curious about what would happen to the bees and asked whether the bees were killed or released in another area.

Someone said the firefighters should have looked for the queen bee first to make the hive removal easier since the rest of the hive will follow her.

While the firefighters managed to remove the bee hive using plastic bags, it’s not advisable to do it on your own. Do call the bomba or a bee hive removal expert if you need it removed.

Begpackers Are Back, One Couple Spotted In Bukit Bintang