Director James Gunn manages to bring comedy and touching moments together with a few catchy songs to remember for the Christmas celebration. 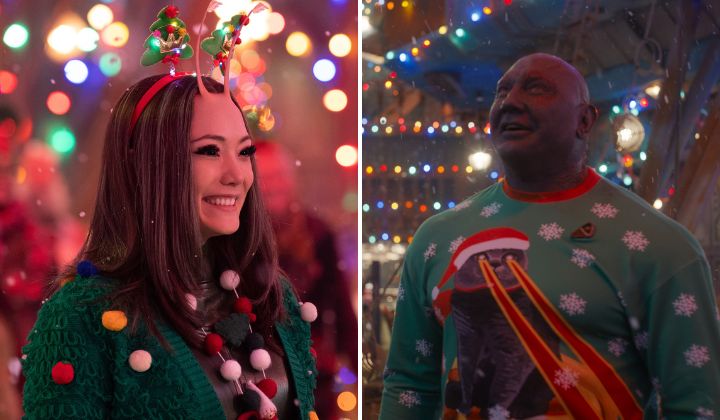 Right after giving us a wonderfully spooky Halloween flick, Werewolves By Night, Marvel Studios presents fans with a goofy Christmas hit titled The Guardians of the Galaxy: Holiday Special.

The short film is a lovely close-out of MCU Phase 4 by director James Gunn before leaving to helm the DCEU.

In GOTG: Holiday Special, the story focuses on the gang trying to create the most special Christmas celebration for Peter Quill, aka Star-Lord.

The story mostly focuses on characters who didn’t get as much screen time in the films such as Mantis, Draxx, and Kraglin.

The Holiday Special opens with an animation that tells a fore story of how Yondu ruined Christmas for a young Peter Quill (Chris Pratt) and Kraglin (Sean Gunn).

The story then switches to Kraglin recounting the rest of the story to the gang while stopping by the spaceport known as Knowhere.

The sad story greatly affected Mantis (Pom Klementieff), and she shared her feelings about the matter with Drax.

She was determined to throw Peter the best Christmas celebration, especially since he already had a hard time dealing with the loss of Gamora.

She roped in the clueless yet funny Drax (Dave Bautista) and went on a journey to Earth to get Peter the greatest present: Kevin Bacon, the hero of Earth.

It was sweet that both Mantis and Drax tried their best to cheer someone dear to them despite not fully understanding the situation.

Throughout the story, the audience finally learns more about Mantis’s history, her connection to Peter Quill, and the deeper reason why she went through all the trouble to cheer him up.

Klementieff truly shines in this short film and brilliantly portrayed Mantis’s earnestness in her mission to plan the greatest Christmas bash at the last minute.

It’s also interesting to find out that we don’t really realize how weird our ‘human’ culture is until someone puts it into a song.

While Drax and Mantis provided great comedic banter, Kraglin’s empathy shone through in this film.

The conversation between Kraglin and Kevin Bacon showed the power of stories and how they could affect someone’s day.

Kevin Bacon also surprised me because he fit in the MCU world well and his presence didn’t feel shoehorned in.

Without giving much away: Look out for the sign.

It’s a good and entertaining show if you’re looking for something light and sentimental to watch in the lead-up to the festive month.

James Gunn managed to balance all these themes together without the film feeling icky or cringy.

The Guardians of the Galaxy: Holiday Special is a self-contained story within 43 minutes so you don’t need extensive knowledge of the characters to enjoy the film.

Just like the usual Christmas flicks, the story has comedy, touching moments, and catchy music. Will it become a classic Christmas movie? Only time will tell.