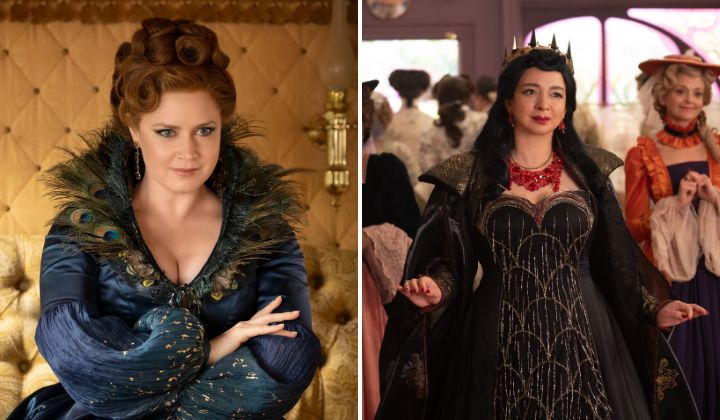 Disenchanted, the all-new musical comedy and sequel to Enchanted, sees the original cast members return to reprise their roles.

Ten years after the events in the first film, Giselle (Amy Adams) and Robert (Patrick Dempsey) wed but Giselle has grown disillusioned with life in the city.

The family moves to the suburbs in Monroeville, in search of a fairy tale life. However, life in Monroeville isn’t as dreamy as it looks especially when the local queen bee, Malvina Monroe (Maya Rudolph), makes Giselle feel more out of place than ever.

Feeling frustrated that her ‘happily ever after’ didn’t pan out the way she thought it would, Giselle turned to the magic of Andalasia and inadvertently made things much, much worse.

Those who have watched the first film, Enchanted, will really feel for Giselle who tried her best to make things better and magical in her family’s life.

She thought she had the real world all figured out, only to find that there was so much to learn.

This was apparent when Giselle found herself receiving a cold shoulder from teenage stepdaughter Morgan (Gabriella Baldacchino), who had grown out of their shared fantasies of a fairy tale-inspired life.

Amy Adams delivers in every scene she was in. Her ability to switch between Giselle’s good and evil personas in split seconds was a delight to watch.

This is all thanks to director Adam Shankmanwho worked closely with music legends Alan Menken and Stephen Schwartz on the score.

Adams said it takes quite a lot of practice to master songs from Menken and Schwartz but singing them was always rewarding because the emotional strides in the songs are naturally moving and propulsive.

The audience might want to pause and take a good look when Monroeville transforms. Look for the signs. Also, the new town’s name sounds too close to Malaysia.

It’s one of the rare movie franchises to have an equally good sequel. Disenchanted is easily one of those films that you can rewatch without feeling bored.

Disenchanted is already available on Disney Plus Hotstar.