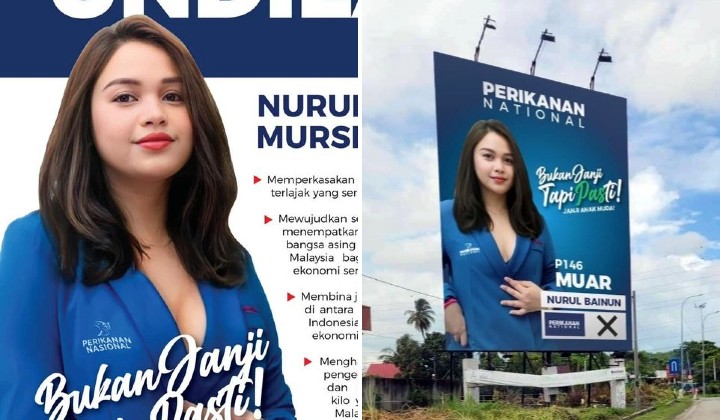 Sound the alarms! Election candidates have been finalized for the upcoming 15th General Election (GE15), but a “new” candidate for Muar has taken social media by storm with a shocking “billboard” announcement.

An image of a large billboard has been making rounds, promoting a pretty woman named Nurul Bainun Murshidi, dressed in a sexy low-cut blue shirt and showing ample cleavage.

The billboard features a deep blue background and reads ‘Perikanan National’ together with the text Bukan janji tapi pasti!

Some Muarians may be disappointed to learn that no, she is not actually a real candidate.

Nurul Bainun Mushidi is an online content creator also known as Enon. The images being spread online of her ‘banners’ on billboards were photoshopped by her, who has been running this series of images as a joke on her Facebook page.

In fact, many netizens have commented on her apparent lack of professionalism, to which she will clarify that it isn’t serious.

However, at the time of writing, she has deleted all the images of this running ‘joke’.

She isn’t a real candidate

Just to be very clear, Nurul Bainun is not a candidate in the upcoming election, nor does she have any ties to any political party.

There are only three candidates running for the Muar constituency. They are Mohd Helmy Latif for Barisan Nasional (BN), Ustaz Abdullah Husin for Perikatan Nasional (PN), and Syed Saddiq for Parti Ikatan Demokratik Malaysia (MUDA).

None of them are pretty young women with ample cleavage, especially as Perikatan Nasional’s candidate is a 61-year-old Malay man.

Still, you should vote for candidates that will do real work, not just pose with their figurative chests out.