Based on the popular Singapore children’s horror book series, the show follows a group of teenagers who investigate the paranormal happenings in their town. 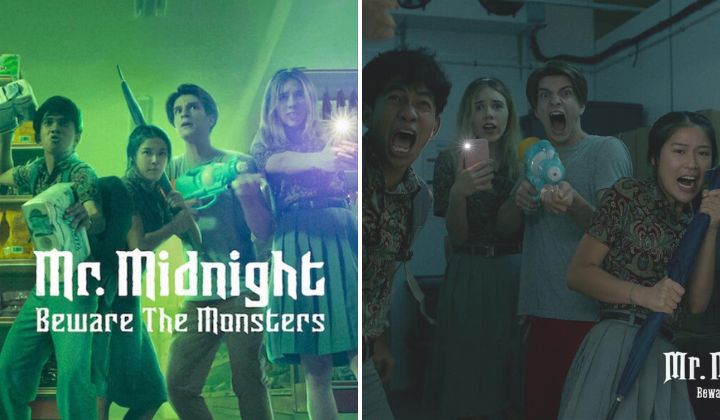 For a country that’s steeped in superstitions, it’s a surprise Malaysia hasn’t produced a fun television horror series led by youths the likes Stranger Things, Are You Afraid of the Dark, CW’s Nancy Drew, and Apple TV’s Ghostwriter.

Thanks to the new Netflix series titled Mr Midnight: Beware the Monsters, our Asian ghost stories finally get the limelight.

The books gained popularity in neighbouring countries such as Malaysia and have been translated into several languages including Malay, Indonesian, Mandarin, and Burmese.

In Mr Midnight: Beware the Monsters, four friends decided to vlog about their supernatural encounters in an attempt to bring attention to the strange happenings in their town.

Their extra-curricular activity soon revealed that their town Tanah Merah is under attack by a mysterious supernatural force.

The first episode started a bit janky and awkward but the show found its footing from the second episode onwards.

I liked that the featured ghosts and monsters also include the ones from other Asian folklore such as the Jikininki and Hutan Lahir.

Since the books were published in Singapore, I assumed that the show would also be set there but I found out that it was all filmed in Batam, Indonesia.

This probably explained why I was hearing a few Bahasa Indonesia words in the dialogue such as ‘bule’ which means foreigner and ‘kakek’ which means grandfather.

Malaysian actor Idan Aedan plays Tyar, a teenager who found out that he inherited the powers of a Dukun.

Despite the inconsistent acting, writing and tone of the show, Mr Midnight has a promising premise. I find myself eager to find out about the monster of the day and how the gang handled it.

There are still interesting plot turns and twists woven into the story to bring it to a satisfying conclusion (and probably an improved sequel).

However, I find that the show has some strange song choices. Maybe the showrunners wanted a theme song associated with the Tanah Merah gang like the Scooby Doo gang.

It’s an ok watch if you can put up with some awkward moments and if you don’t want to watch something outright scary.

READ MORE: 10 Malaysian Ghosts That Are Scarier Than The Western Ones

Lee Chong Wei Lands In Singapore As A Wax Figure!