Not many people get to share the same birthday with their mother. 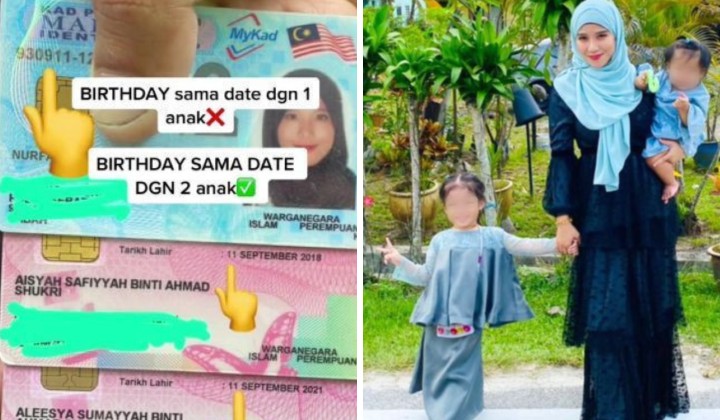 The birth of a baby is always special.

Nurfahtiha Tahir marvelled when her first child was born — and with good reason.

She never expected to share the same birthday with not just one but two daughters.

She thinks this is a remarkable coincidence and God’s providence, a blessing on top of a blessing.

According to mStar, Nurfahtiha, better known as Tia, is grateful as it is easy to celebrate her birthday with her two children.

I indeed enjoy being able to celebrate my birthday together with two children, and I feel special because not many people in this world can enjoy the moment where two children have the same date of birth with their mother.

Mother of two Nurfahtiha on having the same birthday with her two daughters.

Recounting her experience, Tia revealed that she once joked with her husband about getting the same birthday as the children.

In case you’re wondering, it would seem that the children came into the world of their own volition.

There was no mention of induction of labour and no planned C-section.

She explained that her husband had planned their birth date.

When pregnant, her husband often told the unborn child to ‘come out’ on 11 September.

The 29-year-old mother said some people did not believe that the birth dates of her two children were the same as hers.

So much so that she had to show the identity cards of her two daughters to prove it.

What comforted Tia’s heart, many joked with her and said that her husband was good at ‘setting’ the time for her child to be born on the date they both wanted.

The probability that a person is born on any given day of the year is 1/365, regardless of the day.

The probability of being born on 11 Sept is 1/365 for the mother and the daughters.

The probability of three independent events would be the product of the three probabilities.