The room is also equipped with a ceiling fan close to the wall. 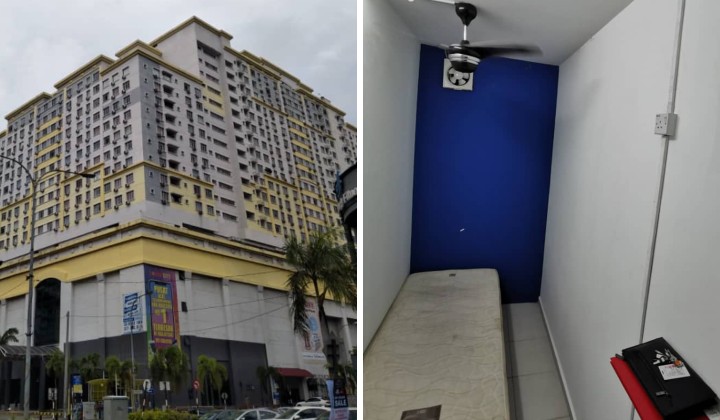 Klang Valley not only has high housing prices but also high rent prices.

Due to high demand, some homeowners have converted storage rooms and even toilets into rooms for rent to earn more income.

A photo of a tiny single room renting for RM350 has been widely circulated on social media recently, sparking heated discussions among netizens about the issue of renting in urban areas.

Netizens posted the advertisement for a single-person room for rent in a Petaling Jaya Facebook group for renting, buying, and selling houses.

The location is in Seri Kembangan, Selangor, and the rent is RM350.

The photo shows that the room is very narrow, only big enough for a single bed, and the room is not ventilated and has no window.

There is a ceiling fan, but the fan blades are very close to the wall.

Netizens broke into a cold sweat for the tenant when they saw it.

Some people even laughed and said that this is the sequel to the movie “Final Destination.”

Many people revealed that they had rented a similar-sized room.

Because of limited budget and being close to where they work, many had no choice but to live in cramped spaces.

Some netizens shared that they had rented a similar room without a fan.

Even more outrageous, some netizens claimed that an apartment unit in Cyberjaya had been subdivided into 30 rooms to rent to more people and make more money.

Others described that such a cramped bedroom is no different from sleeping in a grave, which is very oppressive.

Some wrote that they would rather sleep under a bridge than pay RM350 for such a small room.

How Much Is It To Rent A Room In Malaysia?

It depends on the facilities and location of the apartment.

For medium rooms, it is generally between RM450 and RM900 a month.

Looking at gross costs, equity and investment potential, it is better to buy than rent if you plan to live in your home for more than five years.