Sharing his Popia Goreng journey online, Abang Popia has been getting energetic young fans cheering him on every day. 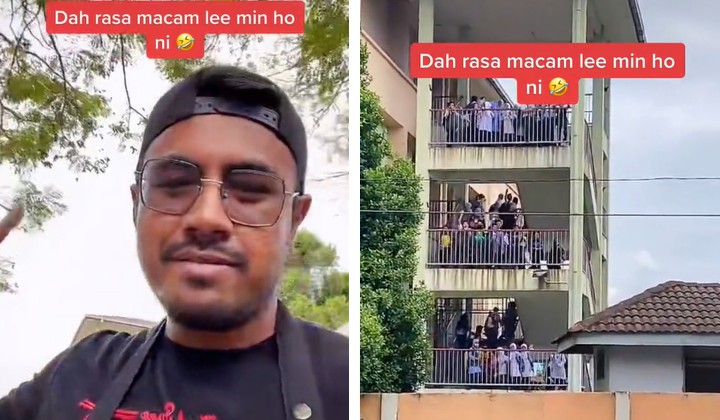 Doing a small business can be challenging at times. But it helps if you’re given a little bit of support emotionally.

This is the case of a viral roadside hawker who has been selling his spring rolls (popiah) and posting about them on TikTok since July this year.

Setting his gear in front of the school in Seksyen 7 Bangi, the popiah seller or Abang Popia (@abgpopia) has been recording bits of his journey of being a popiah seller online and his fans who support him regularly when he does his live or video takes.

Famous because of the enthusiastic ‘fans’

In his recent TikTok videos, schoolkids were heard shouting for him like a rockstar as they waited for the school bell to ring.

In the video, as he was frying his popiah for his impatient customers, he hears his usual “Abang Popia!” call from the back of his stall.

One brazen voice even shouted “Answer us!”, desperate to get his attention.

Expecting only a few of the kids on the balcony, he turned to find quite a number of school kids excited to see him.

They probably want the attention of their beloved Abang Popia or the short fame of being featured in his videos. Either way, they’re hilariously adorable!

Abang Popia expressed that he felt like a Korean celebrity by the looks of his fans. We guess this is how Lee Min Ho feels when he’s with his fans, huh?

Netizens in the comments are amused by the kids’ behaviour. Some of them made jokes and praised Abang Popia for entertaining his fans.

Who needs an Abang Bomba when you have an Abang Popia now?

“You should try selling the ‘Abang Popia‘ t-shirt. It’ll be a fortune to sell to these kids”

“Would you look at the number of fans this Abang Popia has? K-Pop artists don’t stand a chance”

“He could apply as the interim teacher by now”

This is not the first time

Actually, that is not the first time he was this famous. Abang Popia actually became viral around a month ago when he uploaded a video of kids in the school buses and vans screaming his nickname.

The video posted on September 19 has now garnered 5.9M views and 650.1K likes at this time of writing.

It was hilarious seeing the kids yelling his name every time there was a bus or van that went behind him. He was stunned as well and explained to his customers that the kids are actually ‘bullying’ him.

They only want some attention from their Abang Popia, don’t they?

He’s gaining quite the traction

With every viral food spot, there are bound to be long lines. He even tried his best to provide chairs for his customers waiting patiently.

He also entertained his customers regularly by randomly interviewing them in his videos.

We hope he’ll get continuous support from his fans and customers in the future. We would love to try this viral fried popiah one day! We hear the sauce is what makes it special.

Wanna try them? Head on to Bangi if you’re near the area and tell us if it’s worth the long line! Who knows, you might be featured in his videos too.

They’re usually sold out by 2 pm so you better hurry if you wanna taste this viral roadside popiah. All the best!