It’s believed that the young boy was still trying to sell keropok in Gaya Street in the middle of the night despite the rain. 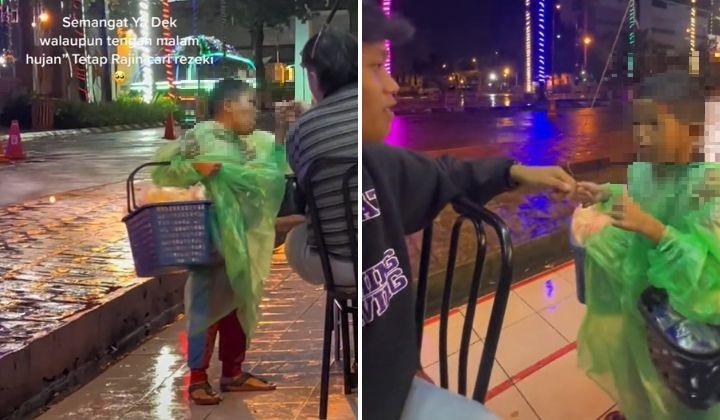 A young boy selling packets of keropok in the rain touched the hearts of many when a video taken by Tiktok user ErickX (@mungz_21) went viral.

It’s believed that the young boy wearing a bright green raincoat was selling keropok along Gaya Street in Kota Kinabalu, Sabah in the middle of the night.

Although the rain could have slowed his business, the young boy maintained a cheerful spirit and continued to lug a basketful of keropok on each arm.

He even exchanged fist bumps with strangers seated at a walkway eatery.

Due to his positive attitude, a man, believed to be TikTok user ErickX, probably wanted to help the boy earn some pocket money that night and gave him RM5 without purchasing any keropok.

The boy looked curiously at the green ringgit note before giving the man a ‘salam’ as thanks.

In the comments, ErickX said the boy quickly placed a keropok packet on their table before running away.

Netizens praised the young boy for his entrepreneurial spirit and hope that he’ll become a successful businessman in the future.

They also admired the fact that the young boy didn’t resort to begging but worked hard to earn some money to help his family.

A few netizens who met the boy before said he also sells fruits and is a cheeky comedian.