It has been decades since the Sanderson sisters appeared in Salem but now that they’re back, they might need to rethink their strategy. 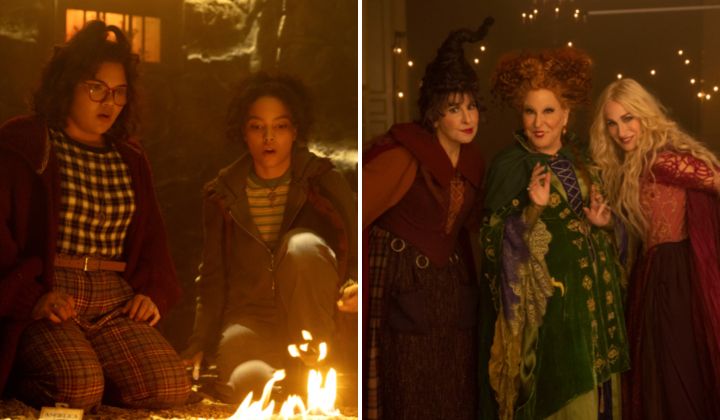 The first Hocus Pocus film in 1993 became a cult classic and is one of the many fun staples of Halloween films to watch.

The story is centered around 17th-century witches named Winnifred, Sarah and Mary Sanderson. Together, they’re known as the Sanderson sisters and they promise to get their revenge on the town of Salem when they return.

The second instalment, Hocus Pocus 2, premiered on Disney Plus Hotstar on Friday, 30 September.

The good and fun bits

The premise of Hocus Pocus 2 is simple enough. It has been 29 years since the Sanderson sisters showed up to cause havoc in Salem.

But when a group of friends accidentally light up the Black Flame Candle, it’s down to them to stop the ravenous witches from destroying Salem on All Hallow’s Eve.

Fans of Hocus Pocus (1993) will be glad to see the Sanderson sisters reunite in all their campiness and musical splendour in the second instalment.

Bette Midler, Sarah Jessica Parker and Kathy Najimy reprised their roles as the Sanderson sisters and provided constant entertainment and laughs from the start to the end.

Since the sisters had not been in Salem for decades, the film’s writers managed to show how outdated the sisters were through the creative and comical incorporation of modern elements.

One of the modern elements that I thought was done well and a fun addition was Mary Sanderson flying on Roombas or robot vacuums, as shown in the trailer.

The ‘witch and magic’ genre has always been popular in entertainment with shows such as Chilling Adventures of Sabrina and Charmed 2.0.

In this film, the trio Becca, Cassie and Izzy (played by Whitney Peak, Lilia Buckingham and Belissa Escobedo) manage to play on this popular trope in the genre a little.

I find the plot twist (per se) was unexpected but it was nicely done and heartwarming. There’s a clue in there somewhere.

In the first film, the Sanderson sisters are portrayed as evil witches who have to suck the souls of young children to retain their youthful looks.

In the sequel, the sisters are humanised, portrayed as survivors and barely got any evil deeds done.

It’s always hard to recapture the nostalgia, but Hocus Pocus 2 did well enough. The movie is comedic and some parts are campy, so it’s a good choice if you want something fun and light-hearted as your Halloween watch.