There are lots of shows and films in store next year. 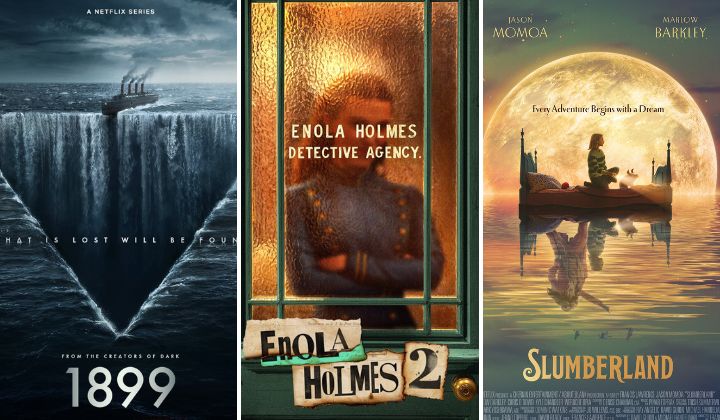 Netflix’s TUDUM global fan event has announced plenty of exciting works in store to look forward to next year.

The list below shows some of the upcoming films and television series, including a new game exclusively for Netflix members.

1. The School for Good and Evil

The friendship between two best friends Sophie (Sophia Anne Caruso) and Agatha (Sofia Wylie) is tested when they are whisked away to a magical school for future fairy-tale heroes and villains.

The first clip of the upcoming fantasy movie The School for Good and Evil shows Sophie after a makeover and ready to change Evil’s image.

2. Glass Onion: A Knives Out Mystery

Rian Johnson presents an exclusive scene of the Knives Out sequel. The clip gives a glimpse of each character’s personality and quirks that Daniel Craig’s Detective Benoit Blanc will have to deal with once he’s on the island.

Enola Holmes has started her own detective agency, but her brother’s fame doesn’t help boost her business. The trailer gives a hint of what’s in store for the siblings.

Jamie Foxx presented the first trailer of his new movie which also stars John Boyega and Teyonah Parris. In this sci-fi comedy mystery film, a series of eerie events thrust three people onto the trail of a nefarious government conspiracy.

The last time Jennifer Lopez was in a film where she had to go toe-to-toe with a bad guy was probably in the film Enough (2002).

In this Jason Bourne-esque action film, Lopez stars as an assassin who has to come out of hiding to protect the daughter she gave up when she had to go on a run from dangerous men.

Guillermo del Toro presented a behind-the-scenes clip of his upcoming Pinocchio film. True to his style, his version of Pinocchio is shot in stop motion.

Slumberland is an adaptation of Windsor McKay’s classic comic, Little Nemo in Slumberland. A young girl named Nema travels to a magical land called Slumberland in search of her missing father.

In the clip, Jason Momoa plays the character Flip who shares the rules of Slumberland to Nema.

A behind-the-scenes clip is a teaser of the scale of the action in the spy thriller Heart of Stone. Gal Gadot stars as Rachel Stone, an international spy working for the CIA.

The Shadow and Bone season 2 sneak peek revealed all the drama, action and tension in store for the audience next year.

Fans look forward to seeing new faces, such as the twin siblings, Tolya and Tamar Kir-Bataar (played by Lewis Tan and Anna Leong Brophy), in action.

After saving his family, the gentleman thief and master of disguise Assane Diop is on the run from the authorities but he can’t keep hiding for long. There’s only one way he’s going out: with style.

Emily has a huge decision to make in her love life and career. Working in the City of Love is not as rosy as it seems and she’ll have to figure out where her loyalties lie in her glamorous life.

Hellbound told the story of a world where supernatural beings deliver unwarned and unexpected death sentences to people. Taking advantage of the hysteria is a religious cult which claims it can predict when people will die and make a spectacle out of it.

The teaser clip shows that the horror and mystery has just started.

The Watcher tells a true story of a married couple who were harassed by a stalker after moving into a home in New Jersey. The stalker named The Watcher terrorises the couple via signed letters.

The Bridgerton spin-off tells the story of a young Charlotte before she became Queen.  The exclusive clip shows her first encounter with George which will spark Bridgerton society as we know it.

The group from London is en route to New York City when they encounter another migrant ship adrift on the open sea.

The game follows a group of teenagers who decided to have a party on an island, but soon experience supernatural encounters.

The choice-driven thriller has high replay value because each decision brings about different endings.

The game can be downloaded from the App Store and Google Play Store, just in time for Halloween!