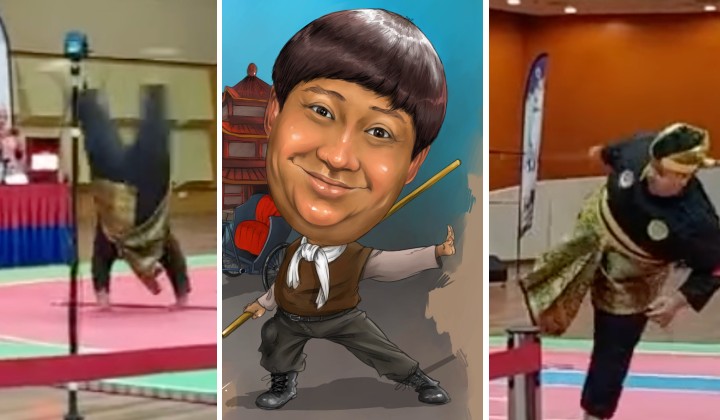 Can a person excel in martial arts despite being plus-sized? Absolutely!

A young silat contestant in Sukma was dubbed the little ‘Sammo Hung’ after putting on an agile performance during the Malaysia Games (Sukma).

His large frame drew a comparison to the heavyweight Hong Kong action legend, who went to the same Peking Opera Academy School as a kid, together with Jackie Chan.

The kid is said to be a student from SMK Sultan Ahmad Tajuddin in Permatang Pasir, Kedah.

His action was recorded and shared on the Kedah Kini Facebook page.

Many thought he’d be slow and clumsy given his size, but he displayed a combo of grace and power.

He also won the hearts of netizens with his seemingly round, jolly face.

Besides displaying slick and nimble moves with a stick, the kid also performed somersaults.

His action was so mesmerising that netizens scolded a guy who kept blocking the camera.

Netizens also appreciate him for practising martial art in an age of gadgets.

It’s not hard to understand why people saw the reflection of Hung in the kid.

Hung, who has been credited with radically changing the martial arts movie genre, is popular among Malaysian moviegoers.

In June 2019, he was even named the recipient of the 3rd Malaysia Golden Global Awards (MGGA) Lifetime Achievement Award.

Having entered the film industry in the late 1960s as a stuntman and extra, Hung has since appeared in nearly 200 movies and directed 32.

He also pioneered the industry’s signature subgenre — the hopping vampire thriller — and helped kick off the New Wave of the 1980s.

He was also the brain behind the 1985 all-time classic Hong Kong comedy horror film Mr Vampire.

Hung has battled many martial arts stars throughout his career, including Donnie Yen in Ip Man 2.