The aircraft marshaller and his colleagues broke out some dance moves while guiding the planes down the runway. 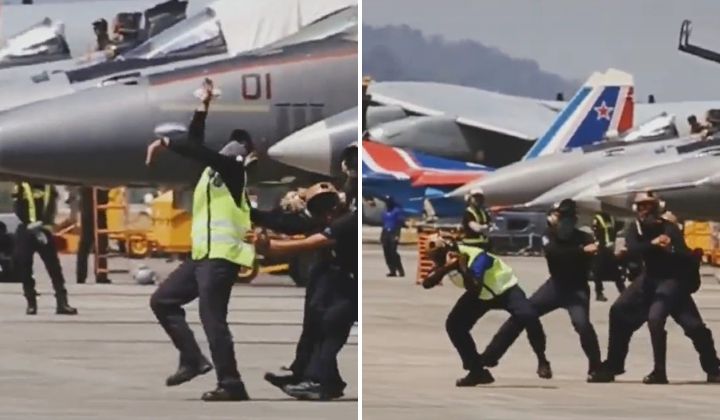 Doing the same tasks day in and out can be such a bore. However, sometimes we can inject some fun into our routine to lighten the mood as long as the work still gets done.

The video, credited to the Youtube page INDOAEROVID, showed an aircraft marshaller from the Royal Malaysia Air Force (TUDM) having fun while guiding planes on the runway.

In the first clip, the aircraft marshaller could be seen lying on his side on the ground and looking bored while supposedly waiting for the plane to be ready for takeoff.

When it was time to guide an airplane, he broke out some fun dance moves to ‘wave’ or ‘hurry’ the plane along.

His antics also entertained his colleagues who could be seen joining and dancing with him on the runway. The group even seemingly coordinated a dance sequence together.

Netizens were delighted to be able to catch a glimpse of a Malaysian airforce aircraft marshaller enjoying his work.

They were entertained by his dance moves and the cheery demeanour he exhibited.

They also enjoyed watching the rapport of the group on the runway and said it makes them happy to see the team happy at work.

Malaysia To Spend RM3.8 Billion On Fighter Jets Rejected By The Indian Navy?