The Malaysia Day celebration starts at 8 pm at the Proclamation of Independence Memorial Square in Bandar Hilir, Melaka. 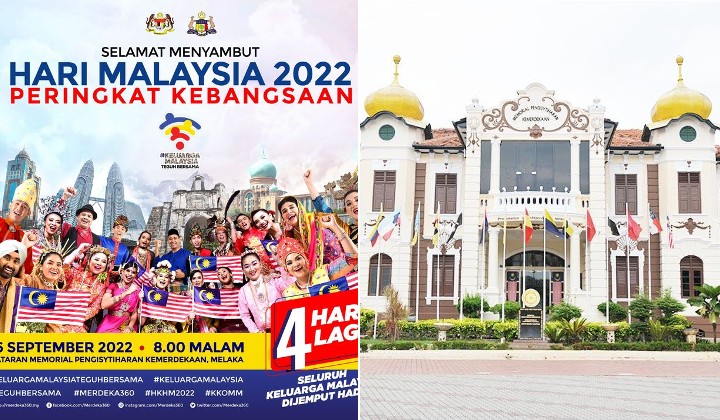 This year on 16 September, Malacca has been chosen to host the Malaysia Day event which will be held specifically at the Proclamation of Independence Memorial Square in Bandar Hilir, Melaka.

To liven up the atmosphere and evoke nostalgia during the formation of Malaysia in September 1963, visitors are advised to dress up in their traditional and ethnic clothes from the 50s and 60s, following this year’s fashion theme.

Around 20,000 visitors are expected to attend the event in Bandar Hilir which will feature various activities involving arts and culture.

The guest of honour and other VIPs will arrive at the venue in rickshaws accompanied by antique Vespa motorcycles, bicycles and a band performance playing songs from the 50s and 60s, according to Shahrom Ravin Daram Abdullah, the Melaka Department of Information (JaPen) Director.

They will also have banners written in Jawi and with old Malay spelling to evoke the era when Malaysia was formed.

As reported by Bernama, Rosnan Nordin, the Director of Cultural Arts Development Division of the National Department for Culture and Arts (JKKN) said, “The audience and guests will be dressed in the 60s and ethnic costumes, we want (the public) to experience the era”.

So far, the preparations are going smoothly and there will be a rehearsal for the celebration this 13 September. No roads or routes would be closed during the celebration as it would be held in a no-vehicle access area.

Around 2,000 parking spaces will be made available near the venue including at Dataran Pahlawan, Menara Taming Sari and Pahlawan Walk.

Other than dressing in the 50s and 60s, a 60s-themed musical performance is also being planned to entertain the public this coming Malaysia Day.

The performance is said to highlight the country’s freedom fighters such as Mat Kilau, Datuk Bahaman, Antanom, Mat Salleh, Rentap & Rosli Dhobi. Do expect an uplifting moment when Datuk Jamal Abdillah sings a warrior-themed song ‘Mentera Semerah Padi’ at the event as well.

Some other highlights of the event are the recitation of the Rukun Negara pledge, performances on “Catatan Malaysia”, and the signing of the Proclamation Book.

The 2022 Malaysia Day celebration will start at 8 pm and Malaysians from all walks of life, especially in Melaka or nearby areas are urged to come and liven up the celebration together.

Stuck in Klang Valley instead?

If you are in the Klang Valley and can’t travel to Melaka for the celebrations, don’t worry! There’s also another event earlier in the day on 16 September.

Keretapi Sarong 2022 will start in various train stations within the Klang Valley as early as 8 am. This is an annual event involving the love for Malaysia’s unity and culture, all celebrated in Malaysia’s most used public transportation, the trains.

Visitors celebrating the national day will don their favourite sarong and equip themselves with traditional Malaysian folk songs that they will sing together in the trains all the way to the secret converging point.

READ MORE: Get Ready For This Year’s Keretapi Sarong Event On 16 September!

READ MORE: Get Ready To Game At The Malaysia Games Festival This September!