TikTok user @kimseri_aina shares with her followers that she turned down two jobs last year as she needs to remove her hijab while working. 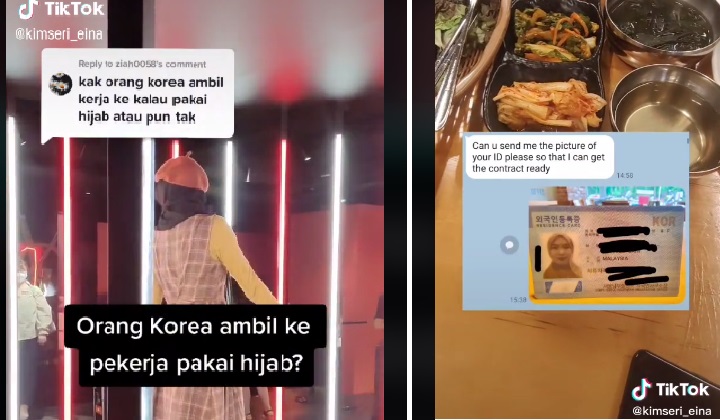 A Malaysian woman studying in South Korea revealed that it was not easy for a hijab-wearing woman like her to land a part-time job in the country.

On TikTok, the woman shared her experience turning down two job offers last year because the employer requested her to remove her headscarf when working inside their premise.

Inside the video, the TikTok user, @kimseri_aina said that her roommate, a non-Muslim Indonesian had told her that there were vacancies available at the factory where she is working.

She went on to say that she had gone to the factory for an interview the very next day. She added that the interview had gone well, but the boss told her that she can work there with one condition – that she cannot wear her hijab inside the factory.

Similarly, she was told that she could not wear her hijab during working hours when she applied for a part-time job as a kitchen helper through a social media application Kakao Talk.

When she sends her identification card to the interviewer, she was asked whether she was a Muslim since her ID photo showed that she was wearing the hijab.

When she replied yes, the interviewer said that she can’t wear her hijab while working at the restaurant.

She then said that she turned down both jobs as she wouldn’t want to remove her hijab while working.

The woman also added that she was not sad at all about the matter, saying that she holds to this saying: “Be like armpit hair, although (it grew) at narrow spaces and often being shaved off, it continues to grow thick.”

The one-day-old video had been shared 1142 times by TikTok users and has received over 250,000 ‘hearts’ by the time of writing.

In the comment section, several users applaud her for sticking with her beliefs.

There are also those who said that the phrase that she used at the end of the video, while funny, has a very deep meaning.