They even opened the car boot to shake the car better. 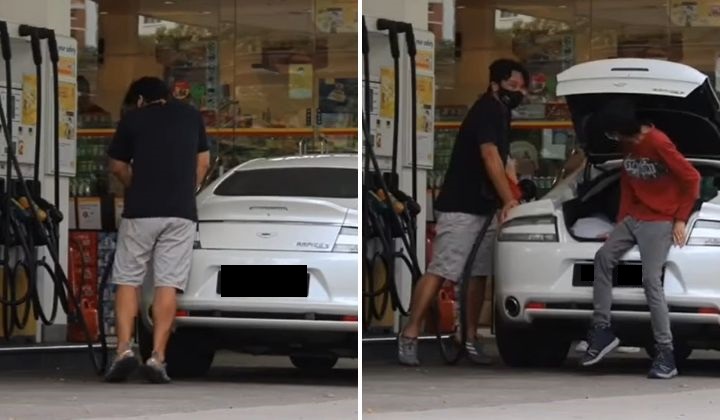 Some Singaporeans have gotten a bad rep for being overly frugal, especially when they decide to pump petrol in Malaysia.

Due to Malaysia’s cheap petrol rates, Singaporeans are often caught employing various ways to ‘maximise’ the fuel tank capacity from shaking the car to using an object to tilt the car.

A recent video posted by the Facebook page Aurizn gave Singaporeans a taste of their own medicine.

Two men were caught on video shaking their Malaysia-registered car in a petrol station in Singapore.

A man in a black shirt was also seen chatting to the station attendant before comically shaking the car’s rear vigorously.

Another man in a red shirt, believed to be the man’s friend, also joined in to help shake the car, although the car didn’t budge much.

They then decided to open the car’s boot and sat on it to shake the car more before checking the price of petrol on the pump machine. Both men laughed at themselves during the whole incident.

The whole scene managed to make netizens laugh at the irony. It turned out that both men were just being sarcastic and had fun doing so.

Sharp-eyed netizens also recognized that one of the men was the founder of Aurizn, Bobby Ang.

Netizens also hilariously pointed out that the car’s suspension was too stiff and worked against their wishes.

A few of them were impressed and asserted that Singaporeans managed to start a new ‘exercise’ trend that also helped drivers to save money.