The armoured vehicle (Prime mover) was on the way back to Camp Perdana after Merdeka parade rehearsals. 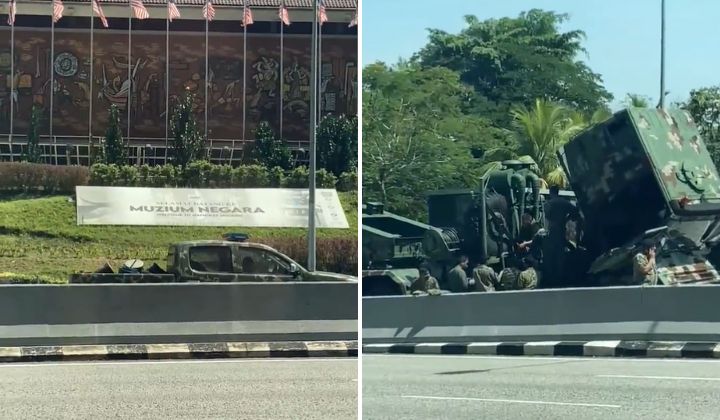 It’s not a great day for our armed military forces because an armoured car transport vehicle (prime mover) broke down on the road after participating in the Merdeka parade rehearsals yesterday (27 August).

The vehicle was on its way back to Camp Perdana in Sungai Besi when its engine failed around 11.26am.

According to Free Malaysia Today, the vehicle came to a stop near the National Museum.

Another military vehicle has broken down in the city centre.

Just a day after a tank broke down near KL Sentral, an army trailer truck transporting a tank can be seen stuck on the right-most lane of Jalan Damansara in front of the national museum. pic.twitter.com/cibeBmYILn

In a video, a group of soldiers was seen peering at the vehicle’s engine. They were probably trying to figure out what went wrong with the engine and what caused the vehicle to stall.

Luckily for them, mechanics were dispatched to the scene and repaired the vehicle at 12.30pm.

DBKL’s Kuala Lumpur Control and Command Centre said unlike the first breakdown involving a tank, the second incident didn’t cause traffic congestion and they received no reports of it.

The situation was handled within a short time and didn’t inconvenience the public.

The army apologised in a statement

The Star also reported that the army’s public relations department said it will issue a statement to explain both incidences to the public soon.

We have drafted a statement and are awaiting approval for its release.

In a statement, the army said 129 army vehicles were involved in the 2022 National Day parade.

They also apologised for the two incidents involving stalled vehicles and causing traffic congestion on the road.

As a precaution, a recovery team together with the Kembalik (military tow truck) would be on standby to tow any stalled army vehicles to prevent traffic congestion.

Previously, a tank broke down along Jalan Damansara and caused a traffic jam. The incident drew many criticisms from the public and raised concerns about the country’s defences.

To avoid disappointment leading up to National Day, here are some of the roads that will be closed for rehearsals.