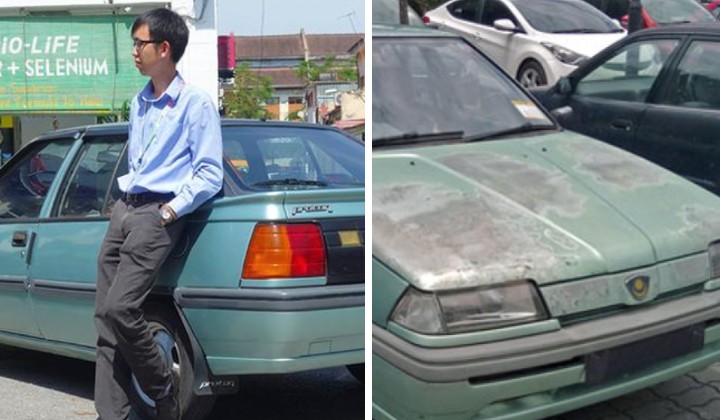 Is there anything wrong with driving an old car?

A dirty old car suggests a dirty, sloppy driver with no pride in him or herself.

But a 29-year-old Malaysian is proud of his Proton Iswara inherited from his grandfather.

It was in rough condition, but Ken gave it a makeover.

He could not afford the cheapest new car back then as he had just graduated from university.

When he first shared his cost-saving journey on social media two years ago, netizens commented on his decision to choose financial stability over his image.

He recently updated his experience driving the old car on Facebook, saying he had no regrets.

No Reason To Change

Modern consumers are often guilty of assuming it’s necessary to change cars every few years to get ahead.

Likewise, some netizens reasoned that it was time for him to change to a better car now that he is entering his 30s.

They commented that those who use older cars are much more likely to be killed or severely injured than drivers of newer cars with modern safety features.

Ken said he could afford to get a Myvi but does not see the need.

He said it’s more important to build up savings for emergencies, family, future planning and investments.

You might be thinking, surely at the age of 29 with five years of joining the white collar workforce, I am capable of getting a better car to replace this aging Saga Iswara. You are right, it is possible for me to do so and even buying a new Myvi 1.3.

Proton Iswara owner Ken on his old jalopy being perfectly alright to do the job.

Over the past four years, he had spent about RM9,000 on repairs and maintenance.

The amount is modest given that it also included regular servicing, paint respray, and engine top overhaul, among other works.

Ken added that his sharing encourages people who want to drive old cars.

He said there isn’t any problem doing so, as long as you don’t mind what people say about the vehicle you drive.

Get Your Crisp New Ringgit Hassle-Free At These ATMs