The controversial outfit was worn by a guest, not a model, at the annual fashion show in Aman Central shopping mall. 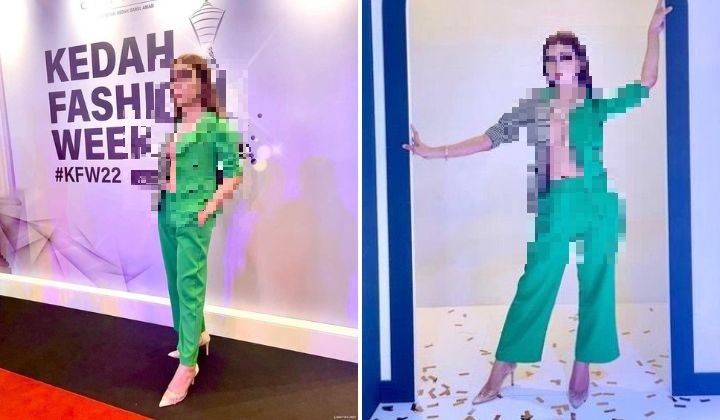 Kedah Fashion Week 2022 (KFW2022) was accidentally mired in controversy when a guest was criticised online for wearing a revealing outfit.

The fashion show was held in Aman Central shopping mall in Alor Setar from 5 to 7 August 2022 with the aim to promote the clothing brands in the mall.

A guest at the fashion show soon turned heads when she wore an all-green ensemble comprised of just an open coat without a shirt underneath and trousers.

Some netizens were shocked by the daring fashion choice and jokingly asked whether the woman felt cold.

They were also taken aback that her belly button was shown. Aside from the partial nudity, some felt that the whole look wasn’t great.

While the styling might have a place in European fashion shows, it’s an unthinkable style choice for the conservative Malaysian crowd.

Due to the backlash online, Aman Central issued an apology via an official statement. They expressed regret that the guest of the fashion show didn’t follow the clothing conduct set by the organisers.

Since KFW2022 is an annual event, the organisers promised to be more vigilant about the dress code in future events.

They reiterated that the fashion show aims to promote the clothing brands in the mall and to highlight local designers.

They also hope the public will continue to show support for the annual fashion show.