The two siblings managed to open and play with 9 bags of flour before their mother came home. 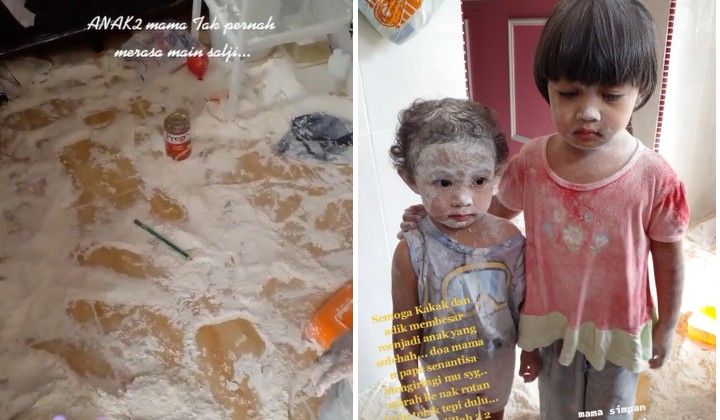 Do you have kids? If you do, what’s the most memorable mischievous thing that they did? Played with your lipstick? Played with dirt?

Well, these kids went a bit extra and played with their mother’s stock of flour. Not one bag, nope. But 9 bags of one kilogramme each. If that’s not passionate baking, we don’t know what is.

Recently, a TikTok user, @zatyaf, uploaded a video of the ‘winter’ catastrophe her two children caused. The video garnered 881.5 K views and 41.6 K likes at the time of writing.

She shared that she went out for a moment for her baby’s check-up while their father was resting from working the night shift before.

Maybe the kids woke up too early and got to business without their father even noticing. Kids, huh?

When she got home, she discovered the back of her house full of white ‘sand’ or ‘snow’. Uh oh, somebody’s in trouble.

Turns out that both of her kids thought they could play with ‘snow’. The wheat flour was everywhere on the floor! Emptied plastic bags were seen scattered throughout the crime scene.

She found out that they demolished almost a carton of wheat flour that she recently bought. She had only used 1kg, but her kids decided that they will use the rest for entertainment instead.

Not only were the floors full of flour, but both of the kids were also covered in the flour as well, from top to bottom (literally). They’re just having too much fun, perhaps.

When asked to answer for their crimes, they gave her the ‘puppy dog eyes’. Well, patience is your best friend now, dear mothers.

We’re all amused by their naughty shenanigans

No doubt if we were on the spot, we’d be speechless and frustrated, just like how the mother felt. But watching from a third-person point of view, we can’t help but laugh. Netizens were both amused and pitied the mother for her luck.

“When you leave the kids to the father be like:”

“The kids be like: Do you wanna build a snowman”

“Maam, there’s nothing left to do then heating up the pan and fry them (the kids that’s evenly coated with the flour)”

Some mothers can even relate to the mischievous crimes their children did, similar to this event.

“My kid played with the water in the middle of the night until the whole house is flooded. They even played once with a chocolate cake, smearing it on the floor and throwing it onto the ceiling”

“My kid spilt a bag of Murukus on our Toto blanket”

“Mine flooded the kitchen with Turmeric water”

“Mine destroyed bottles of face powder”

So, what’s the worst naughty thing that your kids have done? Do share with us. We wanna hear those amusing stories too!

READ MORE: [Watch] Adorable Perak Preschoolers Learn What Is It Like To Become Firefighters