Set in the 1710s, a young woman had to rise to the occasion against present norms to become a warrior to protect her tribe from a formidable alien creature. 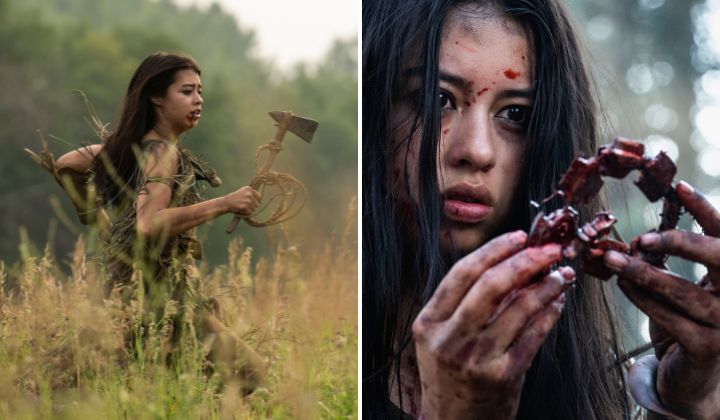 The Predator franchise has spawned several sequels but none have ever topped the first, which starred Arnold Schwarzenegger in 1987.

The upcoming Prey, helmed by director Dan Trachtenberg, scales back and returns to the basics.

The story is centered on the Comanche tribe, known for being fearsome warriors, coming face-to-face against the first Predator hunting on Earth in 1719.

A young woman named Naru (Amber Midthunder) is brought up in the legendary warrior tribe. Despite her abilities, she isn’t allowed to join the hunts and is instead relegated to womanly roles such as a healer.

However, danger soon strikes the camp and she has to rise to the occasion and fight against the gender norms in her tribe to become a warrior.

Since it was set in the ‘olden days,’ I was curious to see how Naru would defeat the more technologically advanced Predator.

The Predator movies so far were set in modern times and the hunters were taken out with modern weaponry.

I enjoyed watching how Naru takes in the scene and used her ingenuity to outwit and outlast anyone or anything that hunted her.

Since she didn’t possess advanced weaponry, she had to think on her feet and fashion better weapons than her tribe members.

It was also exciting to see the Comanche tribe being portrayed as accurately as possible by the filmmakers and cast comprised almost entirely of Native and First Nation’s talent.

Prey flipped the script on Native American culture and showcased how they have their own agency and survivor skills and are not the savages they’re often portrayed to be.

Compared to the other instalments, Prey seems to take a while to reveal the Predator to the audience. However, the action quickly picks up pace once the creature is revealed.

Try to get a good look

Trachtenberg wanted to create a Predator that feels “much more alien and a little scarier.”

As such, the creature in Prey is not donned in armour but fans of the franchise will recognize the iconic skull mask, serving as a homage to the iconic faceplate seen in the previous films.

The skull mask in Prey gives the creature a more archaic, ancient and brutal look.

Prey debuted on Disney Plus Hotstar on Friday, 5 August.