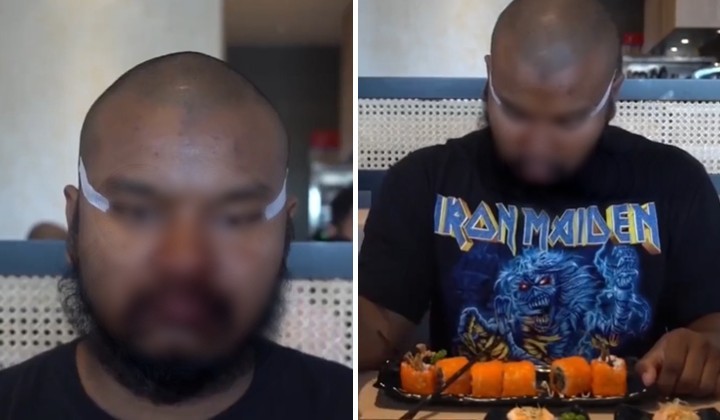 Recently, an ad for a local sushi restaurant featured a content creator promoting its newest branch opening in Penang. What seems to be a normal promotion video of the restaurant turned into quite a fuss for netizens on Twitter.

It’s not because of the promotional elements, but this is due to the racist jokes inserted in the video that made netizens fume.

The content creator, @ceobatu is well known to some for creating funny content and doing collaboration as well as reviews. No doubt the food that he advertised in the video does look good and appetizing but his jokes didn’t really sit well with some people.

Apparently, he allegedly used a curse word and portrayed the Japanese in such a disrespectful way.

Early in the video, a commenter asked “Batu, have you ever eaten Japanese food?” in Japanese and he tried ‘reading’ the comment confidently as if he knew the language.

In his made-up pronunciation, he jokingly said ‘ike ike’ which is a Japanese curse word. However, it’s unclear if he was aware of its meaning.

If that wasn’t enough, further in the video, he had his eyes taped to the side to make them slant. Apparently, it could make him appear more ‘Japanese’.

He touched quite a sensitive element there.

Members of the social media commented on the restaurant’s ad, expressing their opinions and reactions towards the ad. Judging by the negative comment section, most of them didn’t like it ad.

“This is not the marketing campaign y’all thought it was. It’s 2022. Didn’t you make thorough research about Japanese culture? Hey, the internet is already 5G now. “

“What is this, [restaurant name]? He’s saying [curse words]. This is your commercial ad. Halal food for the family. We know that you wanna create a creative ad. But find one that’s more appropriate.”

“We know he has a lot of followers, but I don’t think that’s the right way to promote your food. No need to use a cheap gimmick. You guys sell Japanese food, so respect their culture. Is it really necessary for the slanted eyes in the video?”

At the time of writing, neither the restaurant nor Batu has issued a statement. However, Batu’s social media has been suspended due to people reporting it on Twitter.