This little boy held out his hand from the school gate for a farewell gesture, and the little girl reciprocated. 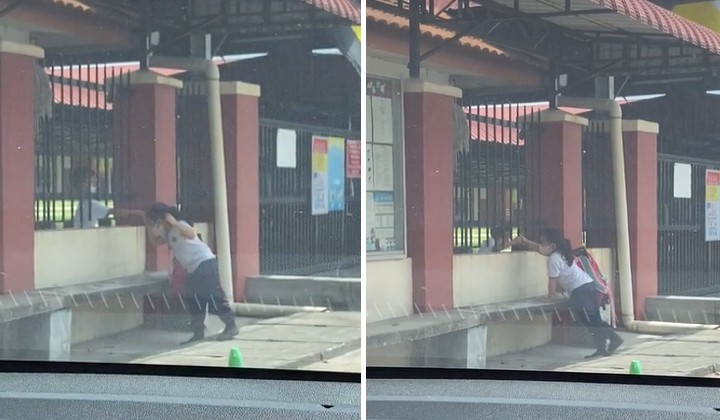 Are you single? If yes, here’s a little touching story that’ll make you feel MORE single.

Recently, a video of a little preschooler parting ways with her male friend went viral on social media, making us all go ‘awww’.

It’s the way they part that just tugs our hearts and makes us chuckle.

The two ‘love birds’ had an adorable farewell gesture with both kissing each other’s hands before they part.

The heartwarming moment was captured by the little girl’s mother, @Nrazween_ and she uploaded the video on her TikTok yesterday. The video garnered around 2M views and 135K likes already.

Her mother mentioned sarcastically in the caption “Waw would you look at my daughter. Gotta kiss her boyfriend’s hands first before coming into the car. Hey, your mom has to wait a full 10 minutes for this drama.”

A lot of people commented on the video, expressing their thoughts and jokes about their cuteness. Both the innocent kinds are so funny and sweet at the same time.

One user even created her own cringey dialogue of a married couple.

Before anything, the mother clarified that this is just a joke and they were just friends

“They’re just kids and they don’t really know anything yet. Plus they’re best friends at school and they have a bunch of friends there that they do this intimate handshake with.”

Her mother also said that she always teaches her kids to shake the elders’ hands respectfully like that but she didn’t expect her to practice it with her guy friends too.

“Just to make things clear, no mother would want her kids to mingle around unrestricted at such an early age,” she said. This was purely a spontaneous act and she even advised her child afterwards to take good care of her boundaries.

But some also think that this shouldn’t be taught young

However, some netizens were also appalled by this innocent act and said that she’s just too young.

Her mother then revealed that her daughter didn’t even expect the boy to give her his hand. It was a spontaneous act and it’s really not anybody’s fault.

Whatever it is, we’re sure that it’s just an honest mistake and we hope that this cute friendship would last as long in the future.

Hey, even a six-year-old has an adorable scandal. What’s your excuse?