It was later revealed that the wedding invite was fake. 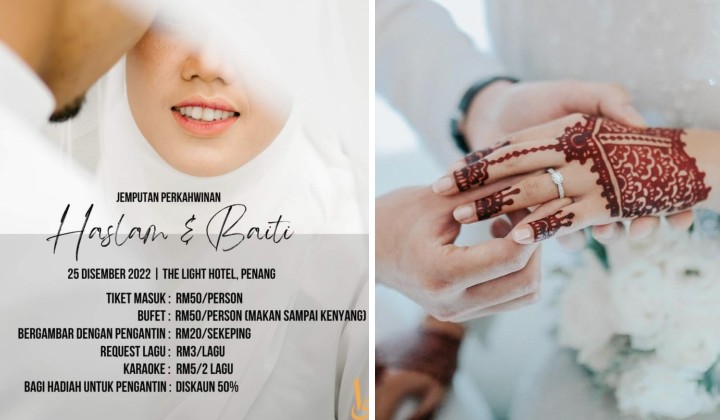 Who has to pay for a wedding?

Traditionally, it is the responsibility of the newlywed couple.

For this reason, a recent wedding invite went viral stating that guests need to pay RM50 per person to attend.

The invite says the wedding will occur on 25 December 2022 between a couple known as Haslan and Baiti.

The guest had to top more money, such as RM50 for a buffet meal, RM20 for a photo with the bride and groom, and RM5 to sing two songs.

Guests can enjoy a 50% discount if they bring gifts for the newlyweds.

Later, it was revealed that the wedding invite wasn’t real, and the actual posting had been removed following complaints.

The verification was made with people working at the said venue, a hotel in Penang.

Nevertheless, it still raised much debate among netizens.

Some pointed out that giving ang pow is standard practice for Chinese wedding dinners.

Others said the wedding invite reminded them of a popular Asian budget airline known for its selection of prebook add-ons.

Some netizens even agreed it would be a good idea for Malay couples to start charging their wedding guests in one way or the other.

The reason is that in Malay culture, wedding guests are not obliged to contribute to the expenses.

Like weddings in other cultures, it is a contentious subject discussed on social media.

Netizens said guests would give as little as RM10, which meant a heavy financial burden for the newlyweds.

Coincidentally, many caterers offer banquet packages from as cheap as RM10 per head.

Even then, the bill could be hefty as the hosts are generally expected to invite a huge crowd.

Others noted that it’s also quite common for wedding guests, especially the aunties, to hog the karaoke.

Some said this is more common among weddings held in rural areas.

Islamic matchmaker Zuhri Yuhyi highlighted that a wedding after the ‘nikah’ is a must celebration in Islam.

The intention is to announce that the couple is married, to avoid ‘fitnah’ among family, friends, neighbours and friends.

Professional matchmaker Zuhri Yuhyi on the obligation to do a wedding ceremony.

He stressed that the wedding must be in moderation and affordability, in line with Islamic values.