Najib’s supporters also performed silat at the entrance to Midvalley in honour of Mat Kilau. 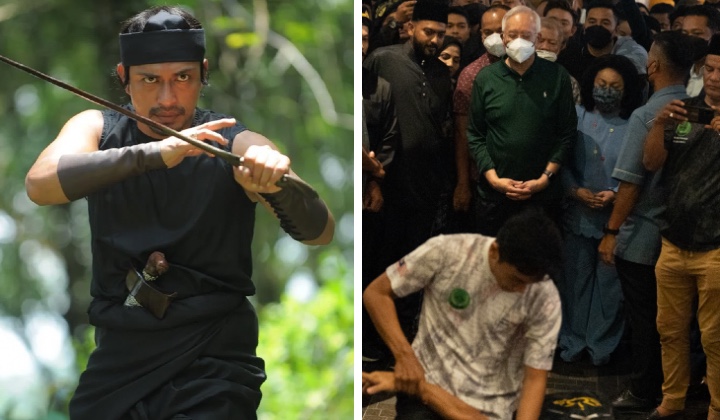 The ‘Bossku’ phenomenon was well and alive at Midvalley on Tuesday night as former prime minister Datuk Seri Najib Razak went there for a movie.

The couple’s arrival was greeted by supporters chanting the ‘Malu apa Bossku’ tagline which has been ever popular since his since fall from power in 2018.

They were also treated to a free screening of Mat Kilau at GSC, McDonald’s meals and electronic gadgets and accessories sponsored by Ninjaz Malaysia.

During the event, Najib and Rosmah also dined at McDonald’s with supporters while many onlookers gazed on in amazement.

Najib and Rosmah’s appearance is likely to further put to rest a recent unfounded allegation that Najib has taken a new wife.

The couple has since filed a report on a photo of the alleged new wife.

Before the show started, Najib also addressed the audience.

He reminded the people that without the country, without a nation, Malaysians won’t have a home and won’t have any identity.

Najib, who is also from Pahang just like the actual freedom fighter, said Mat Kilau expressed the spirit of patriotism and the burning desire for the nation’s struggle.

With power, comes the huge responsibility of prioritising the interests of the people.

He said in a statement that the purpose is to promote unity among Malaysians as JPNM invited people from all walks of life for the free screening.

Syed Muhammad Imran, who is also head of Pertubuhan Sahabat Ulul Amri Malaysia, which supports the pardon of Najib, said a movie such as Mat Kilau is good for a multi-racial country.

He said Malaysians can and should be proud of their ethnic identity for historical purposes.

Malaysians should be prouder of their nationality; of being Malaysian first and Malay, Chinese and Indian.