The driver couldn’t brake in time when the tiger made a last-minute dash in the dark. 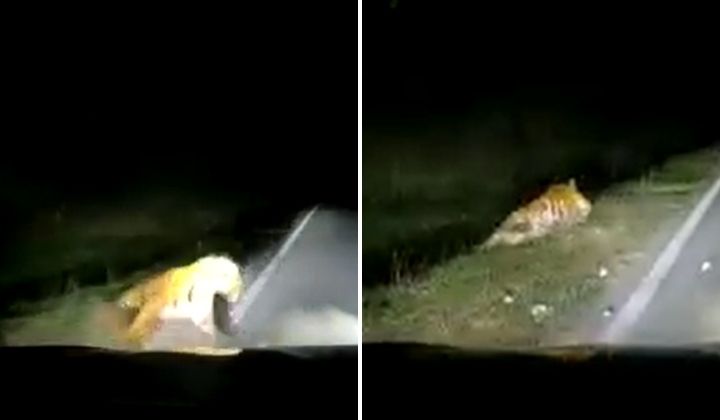 Sometimes we get to spot wild animals when we drive past a highway, especially if the roads go through jungle areas.

Sadly, some wild animals such as Malayan tigers and tapirs become further endangered when they become accidental roadkills on top of being hunted.

On 7 July, a Malaysian man had a shocking moment of his life while driving down a dark highway somewhere in Kelantan.

He couldn’t hit the brake in time when a tiger suddenly dashed across the road from the right and he hit the poor animal.

Fortunately, the tiger escaped unharmed but must have been just as shocked as the driver.

The impact caused the tiger to slide to the other side of the road before it quickly pranced back up and ran away from the car.

Some netizens are worried about the tiger

The responses from netizens regarding the incident were a mix of worry and humour.

Some urged the authorities to check on the tiger to make sure the tiger is uninjured since Malayan tigers are an endangered species in Malaysia.

Others found the lighter side of things and joked that there were more tigers on the road because it is the Year of the Tiger.

A netizen also pointed out that the driver could tell his future grandchildren that he once accidentally hit the tiger and escaped unhurt.

Another person said it was fortunate that the driver didn’t fly through the windscreen or else he would have become the tiger’s dinner.

Here’s to hoping the tiger did not suffer any internal injuries!

[Watch] Motorcyclist Narrowly Survives Getting Run Over 3 Times By Cars