The dissatisfaction is due to too much homework, projects, and tests which are stressing out the students. 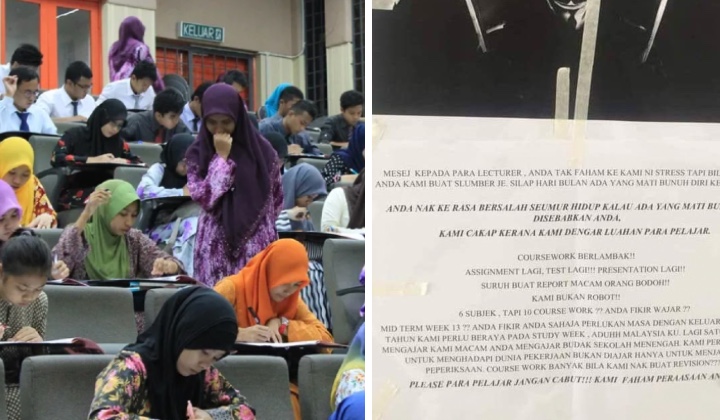 How do you complain about a lecturer?

To ensure that a grievance is taken seriously, a university student spent some time writing a note and posting it on the lecturer’s door.

Recently, a Facebook post featuring a piece of a note posted on the door of the lecturer’s room caught the public’s attention.

The notice is believed to have been written by a student disappointed with the country’s education system involving institutions of higher learning (IPT).

Rather Die Than Live As A Student

The notice also contained complaints claiming that many students became depressed, so some were willing to act beyond expectations because they were burdened with the assignments given.

On the wrong day of the month, some people commit suicide because of you. Do you want to feel guilty for life?

The student warned on the consequence of being pushed too hard.

In addition, the student also described the workload given as excessive and too much to complete.

Assignment again, test again, presentation again! Telling us to do reports as if we are fools! We are not robots!

The student adding to the list of academic grievances.

The public, however, was not satisfied with the outburst and thought that the students today were too spoiled.

Some acknowledge that university can be confusing and challenging, while excessive homework can be bad for mental health.

And so, students are entitled to voice out, but it must be done in a respectful manner.

Netizens also shared advice on how to take care of oneself, balance study and fun, and make it through the three or four years of university in one piece.