Netizens wondered if the hawker had properly washed his hands prior to preparing the food. 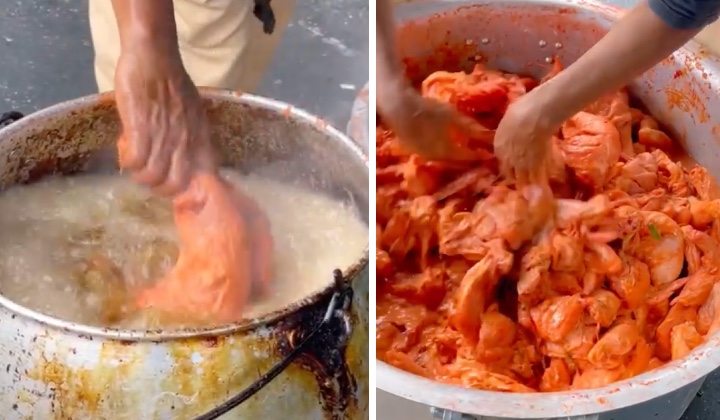 In today’s social media age, it has become easier for many traders to promote their businesses including food.

However, handling food with bare hands could be too much for people to see.

Recently, a hawker at a pasar malam (night market) in Penang caught public attention for marinating chicken with his hands.

The process was recorded and uploaded on Instagram as a short video to promote the business, but it seemed to have backfired.

While the chicken looks tempting, the hygiene of the food preparation leaves much to be desired.

Based on the video footage, the chicken was mixed with a spice recipe before being hot-fried and served at the stall.

Netizens rebuked the hawker, saying that if he handled raw meat and then touched fresh fruit or vegetables, the chance of spreading bacteria could lead to food poisoning.

Some said it is a given that eating out in a public place — whether at a hawker stall or a restaurant – is a leap of faith.

Most people automatically assume that their food was prepared properly and is suitable for consumption.

Some said they might never eat street food again after seeing what goes on.

What Diseases Can We Get From Street Foods?

People who patronize street food have been reported to suffer from food-borne diseases like diarrhoea, cholera, typhoid fever and food poisoning.

But generally speaking, Malaysia is a safe place to eat out and enjoy street food.

Malaysians seldom get food poisoning from local street food as they are challenged by certain germs early on but are not immune.

Most cases of diarrhoea are from ice cubes and water-washed fruits and salads.