The clip satirises the workings and reasonings of the government. 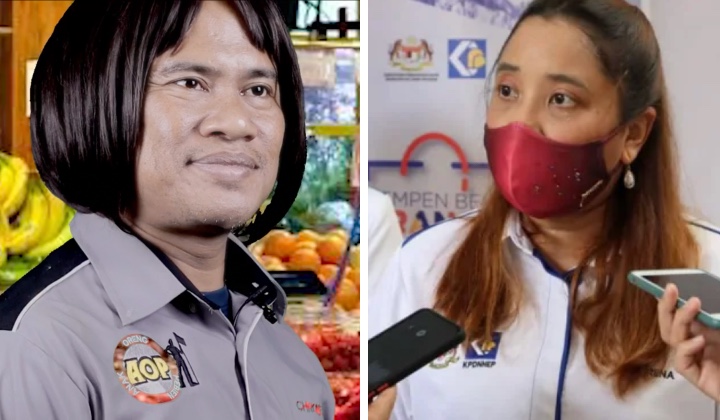 A parody of the Domestic Trade and Consumer Affairs Ministry (KPDNHEP) interview where a civil servant told Malaysians to eat fewer eggs to deal with rising prices has become a hit of its own.

Recently, a YouTuber, DD Chronicle, became an internet sensation after a parody in which he lampooned a KPDNHEP Melaka director, Norena Jaafar.

In just two days, the video which was posted on Facebook drew more than 7,000 comments and 1.5 million views.

DD Chronicle, whose real name is Dediy Sulaiman, recreated the video, right down to the background, hair and uniform.

But instead of just telling the people to eat fewer eggs, he advised them and told them to be ‘bersyukur’ (grateful).

He even explained that eating less is a way for the people to help the government pull through tough times.

Halfway through the interview, cheekily named ‘temumarah’ (marah for angry) instead he berates his staff in a display of bureaucracy hierarchy.

The interviewer also asked him if he is aware of the public’s anger at the government’s ineptness and lack of common sense.

We won’t ruin the end for you, so just watch it.

Many mothers have shared it, with comments like eating less other food and how a politician usually speaks.

Others have praised the parody as promoting civic knowledge and making people aware of political participation while having a good deal of fun at the same time.

Indeed the funny side of parody also induced negative emotions, such as disappointment in the government and its bloated civil servants.

In 2017, one civil servant per population:

Reports say Malaysia has the most bloated civil service in the world.
What can the government do about this? Efficiency? Productivity?@rafiziramli @anwaribrahim @SyedSaddiq

In the past, DD Chronicle had created various parodies on his YouTube channel.

He shot to fame after doing a parody video ‘Siapa Muhyidin’ in which he ‘answered’ a woman who joined a rally.

The rally was a sign of protest after the so-called Sheraton Move in 2020 toppled the Pakatan Harapan government.

Some said the government deserves to be lampooned due to a seemingly endless supply of remarks which are deemed stupid and insensitive.

People express hope that such parodies would cause the ministers and high-ranking civil servants to have a change of mind, earn their keep and possibly make better decisions.

Why are ppl upset at this proposal? Do you think it will make a difference? IMHO Productivity will be the same if they work 2-day week. Heard of "Gaji Buta" "buying loyalty"?. Civil service eats almost half of the national budget. It starts at the top …. pic.twitter.com/SvppmCKcta

Stop Washing Your Eggs Or You’ll Get Salmonella