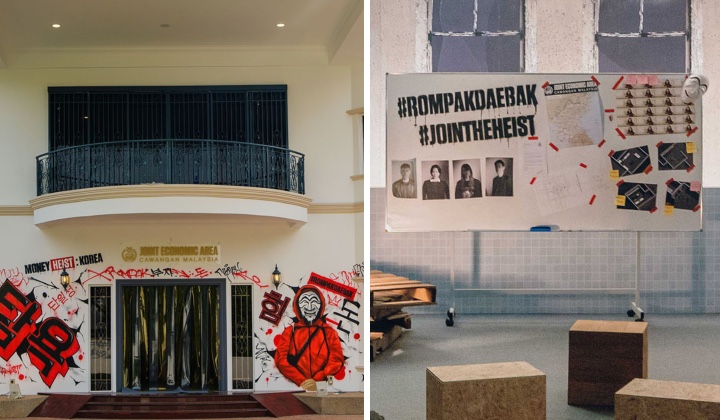 In the Money Heist Korea series, South Korea and North Korea are rejoined as a country and use a new currency.

Money Heist Korea is a derivative publication of the Money Heist series from Spain, creating a worldwide phenomenon.

The event, which has the concept of a treasure hunt game, is greeting fans until 10 July at Bukit Damansara, Kuala Lumpur.

Interestingly, it is taking place in the old building of the North Korean Embassy, which is now empty after Malaysia and the country no longer have diplomatic relations, starting March last year.

All 33-odd North Koreans who used to work there were deported to their country of origin.

A Twitter user, @faridzrdzn, recalled how he accidentally arrived at the embassy, thinking it was the South Koreans’.

For some, it brought back memories of how the place was packed with media personnel gathering outside.

In 2017, local and foreign journalists camped outside the North Korean Embassy for comments on Kim Jong-nam’s assassination.

Jong-nam was killed at Kuala Lumpur International Airport 2 (KLIA2) on 13 Feb that year while waiting for a flight to Macau.

He was approached by two women who wiped his face with a chemical which was later identified as the nerve agent VX.

Others noted that North Korea would probably be miffed that their former embassy is now being used to promote a South Korean show.

At the same time, some said it is a rare opportunity to explore the workplace of a government known as the most isolated and secretive country in the world.

READ MORE: Experience A Heist Of The Century! ‘Money Heist Korea’ Is Here In Malaysia & It’s FREE To Join

End Of The Road

Pyongyang ended diplomatic relations with Malaysia when a Malaysian court ruled a North Korean businessman could be extradited to the United States to face money laundering charges.

North Koreas’s Foreign Ministry described the action as an ‘unforgivable crime’ allegedly committed under US pressure.

Diplomatic relations, which started in 1973, deteriorated after Kim Jong-Nam, the stepbrother of North Korean leader Kim Jong-un, was assassinated in Malaysia.

North Korean embassy officials and their families left Malaysia on Sunday after Pyongyang severed decades-old diplomatic ties following the extradition of a North Korean national to the Uni… pic.twitter.com/CR23z6yMhi

The former North Korean embassy building in Malaysia had gotten its fair share of trouble.

In 2019, vandals scribbled sentences in Korean with several symbols on the outer wall of the building.

It also happened to happen on the same day that one of the accused in the murder case of Jong-nam was released by the Shah Alam High Court.