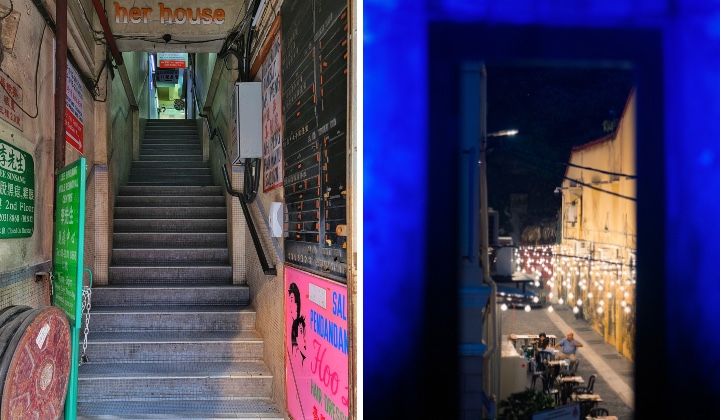 But in recent years, hidden bars are spearheading a movement to restore Petaling Street while remaining true to its historical and cultural roots.

Drawing inspiration from the area’s rich cultural heritage, these establishments attract a younger crowd and more families, offering a mix of classics and new concoctions.

One establishment that has experienced these transformations in a short time is Her House, a hidden bar founded by 7 partners, one of them is a woman.

A hidden cocktail bar on Jalan Sultan, Her House builds on the success of Kwai Chai Hong, said the latter’s co-founder Zeen Chang.

Kwai Chai Hong, or Ghost Lane in Cantonese, is a RM1.5 million restoration project undertaken by Bai Chuan Management Sdn Bhd and was opened to the public in April 2019.

Kwai Chai Hong is the city’s latest project in preserving the rich Chinese heritage stretching back to as far as the 1960s and is worth strolling by if you are in the surrounding areas of Petaling Street.

One of the allures of Her House is the entrance and staircase leading up to the bar.

Located along Jalan Sultan, the vintage shops one has to pass through, going up to Her House, brings one back to the 60s and 70s.

For the uninitiated, a hidden bar, as the name suggests, might be hard to find.

But once found, the sexy and intimate setting of Her House, with its pinkish, neon coloured lighting, is definitely rewarding.

With a feminine and sassy theme thrown in for good measure, visitors enjoy an oriental setting with a touch of modernity.

Her House is but one of the many hidden bars that have flourished in Petaling Street in recent years.

Chang said the boom of visitors since the alley was cleaned up into a tourist destination has now spilt over to the neighbourhood.

She is proud to see the area’s reinvigoration, with many new cafes and bars opening.

We want to get the young locals to understand this area’s heritage, to know their neighbourhood’s history, and to have an emotional connection with the building or the place or the stories they’re going to hear.

Chang was speaking at the launch of a Chinatown bar takeover and heritage tour.

Supported by Scottish gin maker Caorunn, the event sees bartenders from Her House, Kapitan Haus and Rust KL serving a gin-focussed menu at each other’s venues.

The gin-centric menu features Caorunn’s three expressions, made up of the classic version, its Scottish Raspberry Gin, and the Highland Strength which packs a stiff 54% ABV.

Bringing The Young And The Old Together

At the same time, Chang anticipates that more old spots will get much needed and well-deserved facelift.

She conceded that restoring these shoplots, and bringing back the glory days of Chee Cheong Kai, had not been easy.

There were complaints that certain historical aspect of Petaling Street, such as vice and triad activities during its early days, should be left unmentioned.

But she and her partners persisted, with determination to promote the multicultural Malaysian heritage.

One must remember that even back in the old days, there were other races who were already around in Petaling Street.

Their persistence turned out to be a blessing in disguise, though it was only possible with the support of an increasingly discerning public.

History Helps Us Understand Ourselves

Tour guide Jane Rai, who is also the founder of Free Walk Kuala Lumpur Unscripted, said Chinatown had seen constant change since she began running tours there in the 90’s.

She pointed out that despite the name Chinatown, the area encompassing Petaling Street, Jalan Sultan, Jalan Panggong and Jalan Tun HS Lee, was a very diverse neighbourhood, much like the bars that have cropped up there.

However, many still do not know the history of the opening of the business area, which is quite interesting.

It existed more than 100 years ago and was developed by the Chinese who lived in Kuala Lumpur, hence why it is called ‘Chinatown’ or Chinese town.

Historically, Petaling Street was a Chinese settlement during the British colonial era.

There are different explanations regarding the name Petaling Street.

The first is associated with a mountain called Chan She Shu Yuen Temple, which means Petaling Hill.

Second, Petaling is the name of a tree. However, the original name of Petaling Street has not been identified to date.

READ MORE: What To Do In Chinatown KL: Itinerary For Your Weekend in Petaling Street

Others said a tapioca mill in Petaling Street in 1870, built by kapitan Yap Ah Loy, is how the name Chee Cheong Kai, or “tapioca mill street” in Cantonese, came about.

However, Yap Ah Loy was the one who most developed Petaling Street by bringing in many investors to the area after the Selangor Civil War in 1873.

Economic development in the area is also one of the factors that Petaling Street is the focus of, apart from the migration of Chinese from China to Malaya to get jobs due to food shortages in their country of origin.

Its existence further highlights the identity of this country, which has various races and cultures, and its role in contributing to the development of the Malaysian economy.