The smell of excrement was disturbing classes and is a constant discomfort for the children who live in the school’s dormitories. 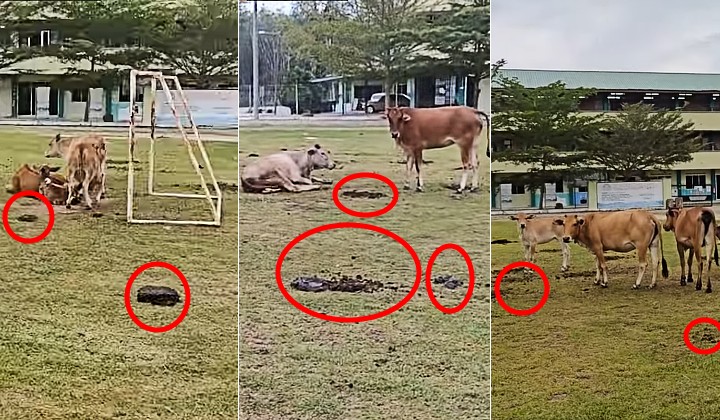 Students and teachers at the Maahad Tahfiz Al Istiqamah Islamic school in Kampung Padang Lalang, Pahang, have had enough of the herd of free-ranging cows stomping around and defecating on the school’s grounds for the past few months.

In a video originally posted by a man believed to be one of the school’s teachers, Zarimi Shubrawi, the school pleads to the cows’ owners to take responsibility for their animals and keep them off school grounds.

Zarimi revealed that the cows have been invading the school for the past five to six months and have been leaving “presents” to clean up every time students want to play ball.

This is a place for kids to play and it’s full of cow dung. We’re tired of cleaning and shovelling the poop every day just to play football.

He also said that the smell of excrement was disturbing classes and was a constant discomfort for the children who lived in the school’s dormitories.

He added that people have suggested that the school poison the animals, but they have been reluctant to do so. #stopanimalabuse

They are simply asking the cows’ owners, who remain unidentified, to keep the animals locked up in stables instead of bothering the school.

Rural School In Pahang Gets Multimedia Studio, Thanks To Taylor’s & A Very Inspiring Teacher