Asyraf won plaudits for not fearing that people would criticize and harass him for being overweight. 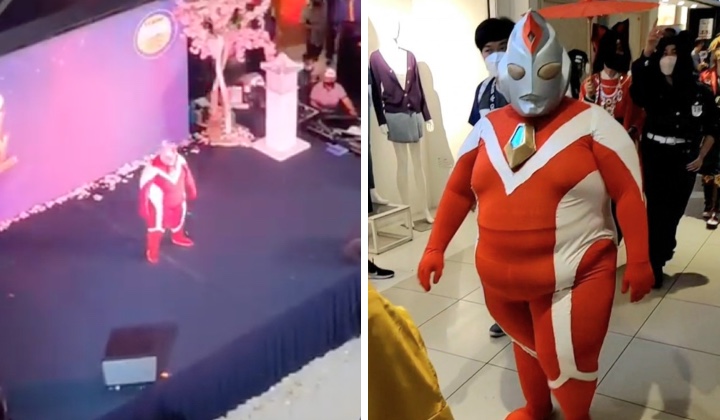 Many superheroes, despite having miraculous abilities, are unassuming and look like everyday human beings.

However, there are some who are show stoppers simply by walking around in public.

A good example is what happened at the Cosplay Party event at Ipoh Parade recently.

Attended by various types of characters, a chubby Ultraman Dyna joined the event and later went viral in Malaysia due to his large body shape.

The chubby Ultraman Dyna turns heads during the event especially when he styled some iconic poses while on stage.

Plus-Sized Ultraman Is The Greatest Thing Ever

This cosplayer is named Asyraf Akashi, and people were impressed with his courage.

For some people, cosplay is a “difficult” hobby, and one of the reasons why it is difficult is because of the issue of “fat-shaming” or “body-shaming” from netizens and the community.

People who are obese or overweight are often belittled and never feel good enough to try cosplay.

But Asyraf has never stopped being interested in cosplay despite receiving criticism.

Although some negative comments on Facebook were harsh, the overall feedback from Malaysian netizens was very positive.

Taking all the bad comments in stride, here is Ashraf’s response via social media :

Fuh, it is tiring and can still withstand leg pain today but I am very happy with friends and congratulations to my idol Adry Exrayde. This is my third Ultra suit, and I know my body isn’t pretty but that doesn’t mean I can’t be what I want right? Finally, thank you Cosplay Party by Ipoh Parade. You are the best!!

Cosplayer Asyraf Akashi thanking the people for their support.

In fact, people even painted artwork as a show respect to Asyraf.

Cosplay is not about our body size but how we show interest in a favourite character.

Hopefully, Asyraf’s courage will inspire more people who are too shy or lack the confidence to start their cosplay.

Cosplay is for everyone, regardless of gender, skin colour, race or body size so long it is within the proper boundaries.