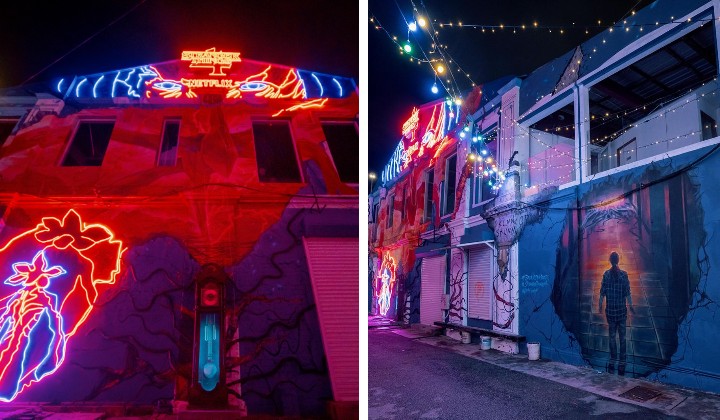 In line with Netflix’s recent premiere of Stranger Things 4, two local artists have worked with Netflix to promote their newest season to Malaysians using their artistic talents.

The Malaccan-born artist @andha.ras took one month to finish the amazing art mural on the walls beside the Kwai Chai Hong Entrance. It was developed in three stages to mimic the scenes from the fourth season. In free-flowing graffiti style and masterly use of contrasting colours, he started off the painting with the grandfather clock or Creel House clock and then spread out to the rift that grows bigger and bigger on the building.

It was a surprise for him when Netflix Malaysia contacted him to collaborate on the Stranger Things franchise as he is a big fan of the sci-fi series. His favourite character in the series is Dacre Montgomery or Billy Hargrove, the stepbrother of the red-haired Max Mayfield.

After graduating from UiTM Alor Gajah in 2014, Andhar has been working as a full-time street artist creating large scale murals across the country, even for The Ministry of Tourism, Arts and Culture and also for the National Art Gallery of Malaysia.

You can see his works of art at Kwai Chai Hong (KCH) from now until 12 June from 9 am to 12 am daily. (The demogorgons also glow in the dark at night!)

Additionally, you can also take pictures with another Stranger Things art installation such as the red lights installed place where Vecna (the bad guy for season 4) lies in the corner inside KCH.

In 2019, Ong was actually the only Malaysian illustrator handpicked among 18 artists around the world as a part of Netflix’s #StrangerRewind project where artists were tasked to reimagine episodes from the first two seasons of Stranger Things and create their artwork with their own styles. Inspired by Episode 2 of season 2, Ong created the winning artwork called the Trick or Treat, Freak poster.

Growing up as a rebellious kid in a small town, Ong was constantly doodling textbooks and exam sheets, adding faces to inanimate objects. Now, she turned her rebellion and love for the arts into a professional career being a graphic designer, children’s book illustrator and co-founder of ForReal Studio. She has worked with international brands previously such as Netflix, Apple, Hinkler Books, Laurier, Acer and Beryl’s.