Malaysia is one of the 14 countries worldwide partaking in the Stranger Things premiere with projections/installations of the Upside Down rift on iconic landmarks. 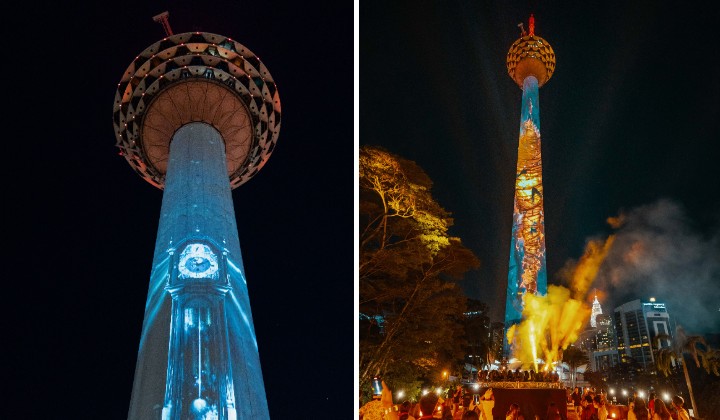 If you’re a big fan of Netflix’s Stranger Things, then you’ll know that their fourth season is out! Finally after almost 3 years (season three was in July 2019)!

Celebrating their big return, the Stranger Things 4 premiered in 14 countries at 15 different locations with each location projecting the series’s teaser on their respective majestic landmarks. Malaysia is super lucky to be one of those 14 countries with our landmark being the KL Tower.

Fun Fact: The United States had the projection on the Empire State Building in New York and XBox Plaza in Los Angeles, Australia on their Bondi Beach and India on their Gateway of India. Check out more here.

What was Actually Projected on the Tower?

On 27th May, Stranger Things 4 premiered in Kuala Lumpur, Malaysia, at nighttime where the teasers of scenes from seasons 3 and 4 were projected onto the 421-metre tall KL Tower. Visitors will have to crane their necks a bit to witness the awesome scenes from the series. Who knew you could project stuff on the KL Tower huh? Petition to do a drive-in cinema at the tower! Kidding.

The projection started with a massive countdown and was followed by a scene from a grandfather clock. Next, the Rift was open between the real world and the Upside Down (an alternate dimension parallel to ours except with a dark, creepy and toxic atmosphere) with some scenes from seasons 3 and 4 playing afterwards. The projection ended with a cool vertical hashtag of #BalikKeTerbalik or Return To The Upside Down.

Also at the KL Tower, there’s a section prepared for photo opportunities at the Creel House with complete true-to-series props and the house’s ominous grandfather clock. At the back of the house, you’ll find the villain of season 4, Vecna, alongside the Mind Flayer and Demogorgon.

The gateway to the Upside Down at KL Tower is open to the public until 29 May, with the projection show set to play in 30-minute intervals between 8 pm and 12 am. If you have time, do visit the KL Tower for photos!

Besides that, there are also art installations at Kwai Chai Hong, a few kilometres away from the tower. There, you’ll witness an enormous mural on the walls of the alleyway created by a Malaccan-born artist Amir Andhar @andha.ras which was inspired by key moments from the past seasons of Stranger Things.

If you walk into the entrance of Kwai Chai Hong, you’ll notice the Bayer’s iconic alphabet Christmas lights before the bridge and another Rift opening in a deep corner of the laneway. You’ll need to visit these spots at night for a more awesome effect.

You can experience the Kwai Chai Hong Upside Down takeover until 12 June between 9 am and 12 am daily.

Stranger Things 4 features two volumes with volume 1 (released 27 May) having 7 episodes and volume 2 (will be released on 1 July) having 2 episodes with a longer running time than the others. Rumour has it that the 9th episode will be for 2 hours and 30 minutes! That’s like a movie! Talk about more drama. You can enjoy the new episodes of Volume 1 now on Netflix.