The honorary degree was awarded in recognition of the prime minister’s contributions to the fight against Covid-19. 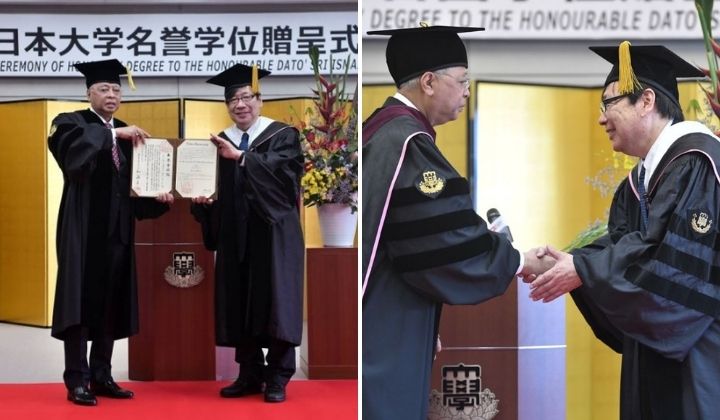 The Malay Mail reported that he was awarded the honorary degree in recognition of his contributions to the fight against Covid-19.

Ismail Sabri said the honorary degree is also for the entire Malaysian Family who had stood in solidarity with the government to face the pandemic.

Indeed, the award is a great recognition not only for me but for the entire Malaysian Family who have proven our ability to deal with the Covid-19 pandemic in our own way.

While the award from one of the most distinguished and oldest private universities in Japan looks random, a netizen did a bit of digging and found out that the Japanese university is not recognized by the Malaysia Qualifications Agency (MQA).

Mans got dressed up and travelled 7 hours by plane to receive an honorary doctorate by a university not even recognized by his own government https://t.co/JxRYacRPla pic.twitter.com/Tuv1kMpZap

According to the netizen, even a university like Universiti Malaysia Pahang, which became infamous for its black magic kit, is in the QS Top Universities ranking but not Nihon University.

The netizen also pointed out that Rosmah received an honorary doctorate from Curtin University, which was ranked 217th in the world.

He said if managing a pandemic crisis called for an honorary degree award, New Zealand’s prime minister Jacinda Ardern should be given a Dr Professor Emeritus title.

Another netizen pointed out the irony of the situation because Malaysians don’t recognize the current government too.

Truth be told, Ismail Sabri received an honorary degree so it possibly doesn’t quite matter if it’s recognized by MQA. We think.

Who knows, maybe the MQA list will be updated soon, as pointed out by a netizen.

receive an honorary doctorate by a university not even recognized by his own government.

Worst is his government not even recognized by Rakyat Malaysia too

Later they will announce that the list is outdated, and update with the uni included🤣🤣