The tunnel is little known even to locals. 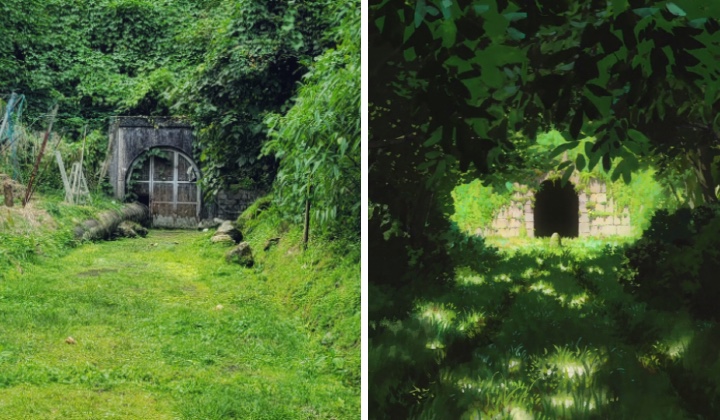 Hayao Miyazaki’s ‘Spirited Away’ is one of the highest-grossing anime films of all time.

With its beautiful animations and fanciful premise, it stands as one of Studio Ghibli’s most popular films to date.

If you’re a Spirited Away fan, an important scene in the film is similar to a virtually unknown spot in Cameron Highlands.

Located in Habu, a farming village in Cameron Highlands is a tunnel that even the locals are not aware of.

The tunnel is relatively unknown due to its hidden location, and little information can be found on the internet about the tunnel.

The only possibility is that the tunnel, which has a large pipe running through it, was built to divert water away.

From the outside, the tunnel has a striking resemblance to the one in Spirited Away, with a similar aura of mystery.

The tunnel is unguarded and looks welcoming. But a gate secures the entrance, and it seemed like it had not been opened for a long time.

There is a small hole in the gate, but not big enough for an adult to sneak through.

Inside, the tunnel is lit up by lights that seem to amplify the aura of mystery.

The road leading to the tunnel is surrounded by farms, while a TNB hydro station and dam are nearby.

Despite the lack of signages, no one should trespass into the tunnel.

But should anyone gets in and come out again, the tunnel should still be the same, unlike in the anime.

Why Is Spirited Away So Famous?

Spirited Away, which revolved around a ten-year-old girl, shattered preconceived notions about the art form.

It also proved that, as a film created in Japanese with elements of Japanese folklore central to its core, it could resonate deeply with audiences around the world.

While its central theme is greed, the anime teaches respect, gratitude, hope, and love, among many other positive values.

Is There Coming A Spirited Away 2?

There are rumours all over the internet that Spirited Away 2 will hit the screens very soon.

Nevertheless, Studio Ghibli has not made any official announcement from their side for a sequel so far.

Even though the film wraps up completely, fans still expect the sequel to be one of the greatest blockbusters.