A friend of the driver claims that the method works. 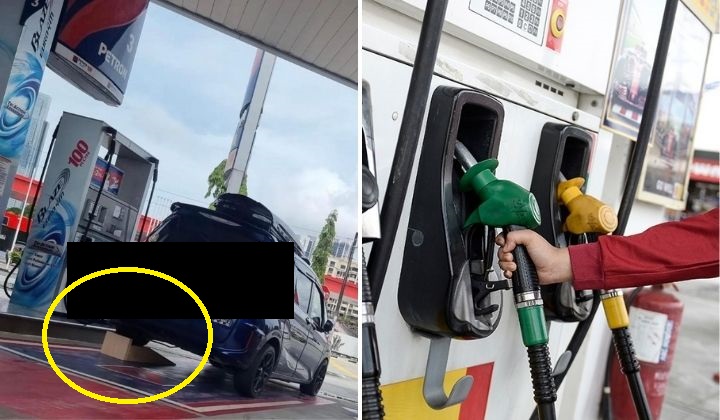 Ever since the Malaysia-Singapore borders have reopened, there have been incidences of Singaporean drivers taking advantage of the cheaper fuel in Malaysia.

What makes it more entertaining are the various ways these drivers have taken to maximise the fuel intake in their cars.

Previously, a car with a Singapore number plate was caught ‘car shaking’ and used a car jack to tilt the car.

The latest phenomenon was more creative and convenient because the driver used a wheel chock to tilt the car.

A Singapore-registered Honda Freed was spotted at a petrol station in Taman Pelangi, Johor Bahru with a DIY-looking wooden chock lodged under the left rear wheel.

It’s not known if the wheel chock belonged to the petrol station or the car owner. The picture was posted on the SG Road Vigilante Facebook group and gained over 1k likes.

It’s believed that angling the car will enable more petrol to fill the tank.

Netizens found the driver’s stunt hilarious but suggested the driver give up their car ownership if it’s too expensive to maintain.

One of them joked that petrol stations should redesign all pump lanes at an angle so it’ll be convenient for these drivers to fill the car tanks to the brim.

Does the method work?

A netizen who claimed to know the owner of the Honda Freed defended his friend for his actions and pointed out that his friend paid for RON97 petrol.

He also said his friend has been using this petrol pumping method for years.

The netizen claimed that the method works because they have compared both of their Honda Freed cars in terms of mileage and fuel consumption.

He recommended others to get Honda Freed because it allegedly has great fuel efficiency.

The Straits Times reported that it all depends on the “vehicle’s attitude” for the strategy to work.

This is because nozzles at petrol stations have an in-built mechanism that triggers a release when the tank is almost full.

This pneumatic release is triggered instantly when there’s any splash of fuel at the mouth of the nozzle.

The fact is some splashback is inevitable and there’s no way to boost a tank’s capacity at any angle. Any benefits gained from a few extra petrol droplets are at best negligible.

Often, more petrol is wasted and drained away due to spillage when the motorist tries to re-trigger the pump after the automatic cut-off.

The best way to maximise fuel efficiency is still to drive the car economically.

Nevertheless, the driver gets an A-plus for effort and ingenuity.

Fuel Shortage On Major Highways Due To Higher Traffic Than Expected, Says KPDNHEP

RFID Refuelling Excites Netizens Because It Makes Everything Fast, Convenient And Cashless