The skateboarding community said the image shown could be misinterpreted and shine a bad light on the sport. 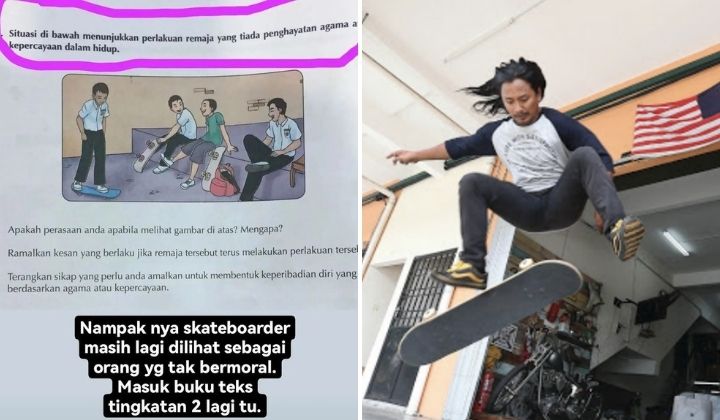 Skateboarding is a popular hobby for many people. It’s also acknowledged as an extreme sport in sporting events such as the Olympics, Asian Games and SEA Games.

However, a picture shown in a Form 2 Moral textbook didn’t sit well with the local skating community because it seemingly implied that skateboarding is an immoral thing to do.

The picture in the textbook showed four male students – 3 in school uniforms but one in casual clothes – hanging out with skateboards.

The three questions posed to students are:

A local skateboarding community @sk8msia expressed their disappointment on their Instagram page with the portrayal of skateboarders in the textbook.

They wondered about the motive of the book publisher to choose the particular image and said the image could be misconstrued about the skateboarding community.

Skate Malaysia also pointed out that skateboarding has been recognized as a sports event in Asian Games, SEA Games and Tokyo 2020.

They tagged the Youth and Sports Minister Datuk Seri Ahmad Faizal Azumu and the Education Minister Datuk Dr Radzi Jidin and urged them to look into the matter.

What is the picture really about?

Netizens explained that the particular exercise in the textbook might be a lesson to discourage truancy since it showed a boy who’s not in school uniform.

However, they agreed that without further explanation in the textbook (or the answer script from the teachers), the image could be misinterpreted to imply that skateboarding is immoral behaviour.

Some said a better picture could be used to demonstrate truancy such as mat rempit or people taking drugs instead of falling back on a negative stereotype about skateboarders.

Skate Malaysia agreed that the incomplete information could be misunderstood by others and that could further spread the negative stereotype about the sport.

They also pointed out that the sport has nothing to do with one’s religion.

Other netizens advised skateboarders to continue to show that the skate community supports one another and work and play hard together.

A netizen explained that the sport requires high self-motivation and getting out of your comfort zones too.