If you don’t remember these legendary Raya ads, you’re probably too young. 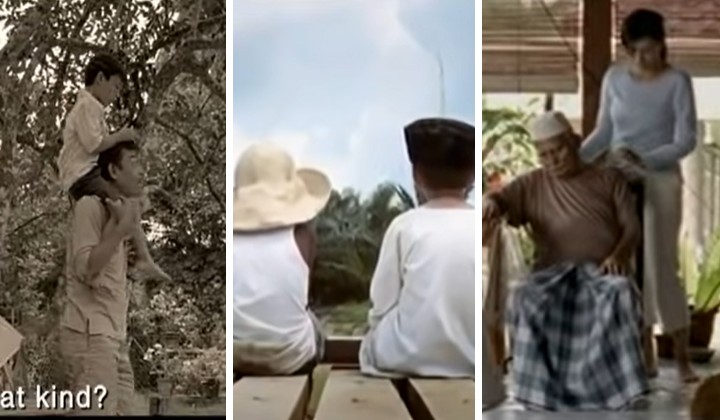 2022 Raya Aidilfitri is a week away, so what does that mean?

The heartfelt ones, the amusing ones, and even the overly dramatic ones, Raya Ads are something that we Malaysians patiently wait for every year.

Of course, there are a lot of amazing Raya Ads through the years but here we’ve compiled some of the nostalgic ads that you could reminisce on.

Let’s take a look at the 7 nostalgic Raya Ads:

Who doesn’t remember the Murai bird one? This is one of the most legendary Raya Ads there is.

This ad tells a story of how the dad tested his son’s patience by asking him “What kind of bird is that?” repeatedly until he snapped.

He then revealed that once upon a time, he used to entertain his little son with care when the kid relentlessly asked the same question over and over again.

Another one that’s bound to bring some nostalgic flashbacks is the ‘Ikan Di Laut Asam Di Darat’ one. Boy, this ad got us singing bits of the classic song back.

This ad was done when Deepavali and Raya Aidilfitri coincide back in 2005 (DeepaRaya). It told the story of two interracial childhood friends (Raju & Suparjo) reuniting together as neighbours when they grew up.

The reunion started all because of the memory of the two fishing together by the river when they were kids, singing the same song. It was a very heartfelt moment when they hugged each other at the end. *wiping tears*

This one is named ‘Al-kisah Janda Beranak 7’ or the story of a widow with 7 children prepping for Hari Raya. The kids were diligently helping their single mother cook Raya dishes but they forgot one important thing: beef and the other internal organs of a cow.

And so began their light-hearted and strenuous journey to find the missing parts at the market via a little boat or sampan. It was already late at the time so there was no stock of meat already.

However, what they brought back instead literally shut their mother up.

If this doesn’t touch your heart we don’t know what will.

This ad revolves around the duties of a woman taking care of her ill father together with her family after he was hospitalized.

But she did it in a way that made her old father sad when her husband suggested that they should separate her father and them from the dining table and give him plastic dinnerware instead of the real fragile ones.

She realised her mistake when her kids ‘played’ the situation in front of her and her husband, indicating that when they grow up, their mother’s and father’s table are going to be outside and theirs inside. Awsome subtle sarcasm for a kid, don’t you think?

This funny Raya Ad tells a story of a female taxi driver entertaining a man from KLIA to his hometown in Negeri Sembilan.

With his pretentious accent and her on-point sarcasm throughout the journey, this ad amuses us with both of the characters’ quirks. The man also accidentally blurted out his true ‘nogori‘ accent in the middle of the ad, obviously tearing down his masquerade.

“Itu kherbau linthas jhalan,” replied the taxi driver to the man with her witty British-accent reply for a simple buffalo crossing the street.

This one got us hungry for cekodok pisang.

This ad which also featured Adibah Noor, comically plays a story of the journey of a woman going back to her hometown while facing numerous fasting challenges along the way.

She bought some cekodok pisang for her break fast on the train earlier in the ad and mistakenly took someone else’s beside her while giving him the angry stare-down.

It took an embarrassing and regretful moment for her on the train to realise the mistake that she has done.

This 24-year-old Raya Ad tells a touching story of a worried woman coming back home to her kampung after hearing that her mother was sick.

On the way home, she reminisced the memory of her growing up with her single mother and how her mother has always carried her both physically and metaphorically when she was a kid.

“I am no longer the little girl you carried” were the last words she ever said to her mother after the fight and to return now to a house full of worried villagers, made us linger with suspense.

These nostalgic Raya ads are sure to relive your younger years and make you look forward to the upcoming festivities this year, especially after two years of Raya with restrictions.